Good morning all , Happy Family day or President's day where ever you may be . Today I have book four from the reader round up. VENI VIDI VICIOUS  (A Viking Pride and Prejudice variation) by Elin Erickson 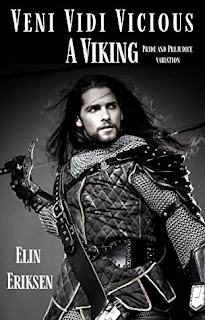 A unique story in the Austenesque catalogue—a Viking era variation of Pride and Prejudice. Set in the late 800s when King Alfred the Great ruled in Wessex and Harold Fairhair united tribal Norway into one kingdom.

Elizabeth’s courage had risen when faced with the fierce Viking, but what will she do when she finds herself as a stowaway on a Viking ship, heading for a major sea battle?
Fitzwilliam has been taught since infancy that men do not love, but can he withstand the temptation of giving his heart to the one woman whose eyes he cannot resist?
The Bennets have travelled to London to trade and visit their relations when Elizabeth’s brother, John, enters the house, battered and bruised, announcing they are expecting guests the next morning.
Elizabeth has no choice; she is forced to wed the savage Viking Fitzwilliam Darcyson to save her brother, to sail across the North Sea to a foreign country with pagan customs. Fortunately, her most beloved sister will travel with her as Jane has wed the amiable chieftain of Netherfield, in a double wedding with Elizabeth and the Jarl of Nidaros.
A ruthless time in history is brought to life through Elizabeth Bennet and Fitzwilliam Darcyson’s eyes as they get to know one another and adjust to each other’s customs through battles, hardships and bliss. Be warned, this is not for the faint of heart. This is an uncensored, unglorified medieval tale with all the gory details. Approximately 148 000 words.
MY REVIEW
When Elizabeth and her family travel to London to do some trading and see family. She doesn't realize her life is going to change forever . When her brother comes home beaten and saying there will be guests arriving in the morning . When morning comes so does Fitzwilliam Darcyson , a savage Viking who has eyes on Elizabeth. She is then forced to marry him and and head across the north sea to land that she knows nothing about . Will they be able to love each other through wars , hardships and some bliss . Will they be able to survive and find the love that both of them have for each other .
Ok this is one of those books that has so many characters in the pages . Elizabeth the heroine of the story what can we say about her . Man she is one strong woman , stronger then she even realized at the start . She has been put through so much being married to a Viking . She overcomes the hardships and becomes the head of the household and when push comes to shove she really becomes like the chieftain in her husbands absence . Fitzwilliam well he is a brutish man , tall, sexy and built . He isn't all bad he has a love for Elizabeth that has him going in circles because Viking men are told they can't love . He does become a big old softie and we really get to see them grow and become each others constant and watch them truly fall in love with each other . They are very well written and complex and the cast of characters that help them navigate their love lives, each of them rich and well written.
This is a retelling of Pride and Prejudice in a violent way . The story is rich with Viking history and lore . The characters are well written and you can't help but fall in love with each of them . The author takes on quite an adventure ride with twists and turns that will have you on the edge of your seat most of the time. There were times through out the book though I felt like the author over described scenes and places . I felt that in those parts it kind of drug a little and slowed down the pace . Over all I did enjoy this book and the characters . So if you want your vikings with a austen twist check it out .
Posted by BOOKS TO CURL UP WITH at 7:42 AM