We are on day two of reader roundup and today I have another new author for you to check out. SIMON SAYZ and his dystopian tale CITIZEN HILL Autonomous Zone book one 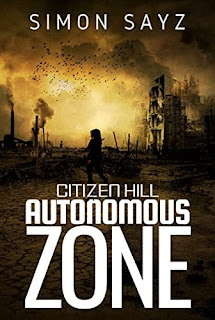 Trapped outside the city in the Autonomous Zone, Citizen Hill finds an unlikely ally in Julian Bless, which brings into question—the enemy of my enemy is my friend, or is he?

Citizen Hill is a genetically enhanced warrior trained since childhood to hunt infected humans and rogue Gollums. When a new faction, Elysium, moves into the Autonomous Zone, declaring ownership, the Therian Federation tasks her with one mission: infiltrate the organization, take the leader, Julian Bless, into custody, and disband the followers. Once on the inside, she discovers a horde of infected humans and Gollums responsible for a shocking series of brutal attacks devastating the Township of New Therian.

When the Gollums turn on the humans in the Autonomous Zone, slaying whole colonies to eat their flesh, word gets out. The leaders of New Therian, fearing a Gollum invasion, quarantine the city. The act results in a massive lockdown, sealing the city of New Therian in a dome for fourteen days.

Citizen, forced to turn to the humans of Elysium for survival, finds herself at odds with her programing, her creators, and what it means to be human. Fighting side by side with Julian Bless, she discovers there’s more to the virus, the Gollums and Trolls, the Federation Leadership, and her origins.

Several Federation Dignitaries will stop at nothing to erase Citizen Hill and Julian Bless from history and shield the truth of the deadly virus consuming the Autonomous Zone.

Citizen is a genetically enhanced warrior who has been trained since childhood to hunt out infected people and the threat of gollums .But when a new faction comes into the area and take control . The Elysium are declaring ownership and when the Federation hears about this they quarantine the city in a giant dome for fourteen days . When Citizen is forced to turn to the members of the Elysium for survival . She really finds herself at odds with the programming of her creators and honestly what it means to be a human being. With the help of Julian Bless she starts to understand what it means to be human.

This is one of those books that every character is strong . The two main characters are very well written . Citizen is one of those characters that is strong and fierce but as she comes along you see her grow more and we see her become more and more human . She is a fighter and will fight till the end . Julian Bless well he is the leader of the Elysium and he is charismatic but I feel there is a sadness in him that you can't shake sometimes. He is a fighter but also a peacemaker through out the book . There are so many great characters that are in this book . All really well written and each of them complex .  My favourite character was the robot dog . He was so much fun to read when he went from good to bad .

This book is one of those books where you don't really know what it is about until you open the book . Until you open and start reading and man when you get into this book you really get sucked into the story . The characters are well written and complex and the story has so many twists and turns . There are some areas I did feel like it dragged a little but overall i did enjoy the story and really want to read more from this author . So if you want a good dystopian tale check it out .