Good afternoon peeps , I really hope that you are all staying cool and reading some good summer books . Today I have for you thriller by a young author. Lets check out 1,00 COLONIAL FARM ROAD  by Jeff Zimmerman. 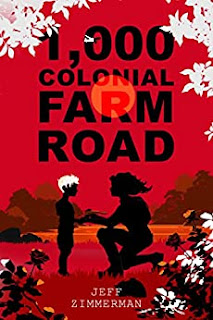 Esther Ahava Esperanza is an ex-Israeli Defense Force infantrywoman with a PTSD fueled past. Working as a ‘fixer’ for Langley, Virginia, she’s assigned with a job that is far different from all the other ones she’s done before. After assassinating an Aryan Brotherhood convict and a drug addicted prostitute, Esther is tasked with kidnapping the couple’s child and taking him under her own wing. Raising her adopted son to be a future contract killer for the CIA, Esther quickly learns that being a mother is harder than being a hitwoman. And it is true what a plethora of people say... love really can be tough!

Esther Esperanza is an ex military who was part of the Israeli Defense force and she is suffering from PTSD . She is a fixer and when she is tasked with an unusual  job she is tasked with taking their young son in and taking care of him . She doesn't know what is harder being an assassin for the CIA or raising a son . She quickly learns that having a son is harder then being an assassin .

When you start  a book and instantly connect with the main character is a good thing . Esther is one of those characters that you read and go wow . She is a kick butt woman but underneath all her training she is a woman and a mother who worries all the time if this will be the last time she sees her son  .  There are so many complex characters in this story . They are complex and you will love and hate them at the same time .

I have been following this young author for awhile . This is the book that I really enjoyed , the author has grown and this book kept me entertained . The characters were well written and you really start care for the main character . The book moves at a fast pace and there is a lot of action through out the book . It may be thriller in nature there is an under tone of what a mother would do to keep her son safe and loved . The author has really grown and it shows in his writing style . So if you want a kick butt heroine with a past that will have you on the edge of your seat through out the book . So check it out  a great book for your summer reading list .