Good afternoon my peeps , I hope your Tuesday is going good and you are taking care and staying cool . Today I have for you MAGICK AND MISCHIEF  by Michele M Pillow. 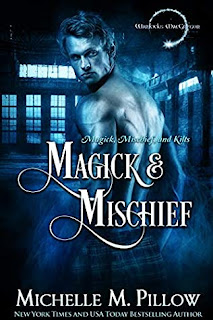 Kenneth doesn’t have room for anything in his life beyond his responsibilities as an immortal warlock and a father. Being a single dad is difficult, especially when that toddler is more powerful than his entire magickal family combined. Standing against forces who want nothing more than to harness his daughter’s power takes focus, dedication, and the willingness to put his life on hold. So when the mysterious yet beautiful Andrea appears on his doorstep, he can’t help but distrust her.

For two years, Andrea Breaux has been running from a dangerous supernatural force. She’s learned to stay on the move, to never allow grass to grow under her feet, and to be suspicious of everyone and everything. When she finds herself in a house surrounded by magicks and a powerful child who would rather she not leave, Andrea isn’t sure what to do or if she even wants to go. But staying puts everyone at risk, especially the Scottish hottie in a kilt, Kenneth MacGregor.

Kenneth has eyes for only one person in his life . He is an warlock and also a single father . When he finds out his little girl is more powerful then his whole family . He has to fight the forces that just want to harness his daughters powers . It has taken his life to keep her safe until the day Andrea appears in his life . He can't help but not trust her there is something about her that puts him a little on edge . She has been running for the past two years . When she finds herself in the house where magick is strong and the little girl doesn't want her to leave . She is confused should she doesn't know if she should stay or go but the longing is to stay. Will she be able to keep everyone safe especially the sexy man in the kilt that sets her heart beating a little faster .

It took us a bit to finally meet Kenneth but wow when we did we were not disappointed. Kenneth well he is immortal and a powerful warlock but he is also sexy as sin and when you meet him you want to well hug him .  Andrea she is a mystery she has been hiding for so long and when we meet her she is running .  She is strong and feisty and when you put her together with Kenneth there are sparks and hilarity that ensue . They are such strong fun characters that are well written and complex .

This is the seventh book in the series and it doesn't let you down . It is a fun filled action packed book . The characters are well written and complex and you will love them . I love these characters and when you sit down to read them you will love them too . I did find it just a little hard to get into the book at the beginning but once i got through the first couple of chapters I was hooked . I can't wait to see where these characters go in the future . So if you want a book with some hot men in kilts and the magic they can do check out the series .