Good Thursday everyone, hope everyone is thawing out or if you are still snowed in. I have the book for you .  It will melt the deepest snow banks , SIREN FOR THE BEAR, by Meredith Clarke. 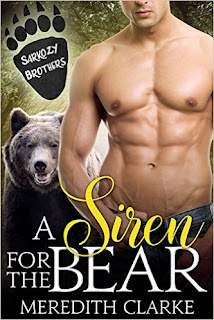 Carson Grant sings for her supper. Between her covers and her weekend gigs, she’s been making it well enough as an indie singer.
Until she lands a job she can’t say no to.

Marek Sarkozy knew, the moment he saw his Siren, that she was the one for him. Now, he’ll do whatever it takes to make her his, even if his heart ignores his reality.

The Sarkozy men hid a secret as old as their ancestors. Their bear shifter genes are slowly dying out. But Marek doesn’t care if he is the last of his line. Not as long as he can have Carson.

But will the danger to his clan outweigh the strength of his devotion to his chosen mate?

MY REVIEW
Siren For The Bear is the first book in the new bear shifter series by Meredith Clarke . This is a short novella in which we meet Carson an indie singer and Marek Sarkozy the hot sexy bear shift and in a band. They meet one night when Marek is checking her set at a local club.  They are drawn to each other and are attracted to each other . But will they survive the people hunting Marek and will Carson survive the truth.
There is a lot packed into this 121 page novella, the author combines mystery and romance quite well . We also have the band full of sexy ass bear shifters , one cuter then the next . Marek is one hot sexy alpha man, who is the last of his line and the leader . He is dodging bullets and romancing the sweet Carson. Who is a very strong willed mortal, who wants what she wants . They do have a rocky road at first but they soon realize there is more going on . They know they need and want each other .
Marek knows she is his mate and will do everything even let her go to keep her safe .
I really liked these two characters , Carson is so with it and knows what she wants . She has a brain and isn't really stick thin. She is curvy and with it , that is something I like very much. Marek just oozes sex and is such a complex man . He is so well man . You have to read the book don't want to give away too much . But some scenes will melt your kindle, the recording booth for one.
I really enjoyed this book there are a lot of loose ends that will all come together in the other books in the series . I want to know more about the curse and if it can be broken. Also more about the history of the bear shifters. It is a really quick read and you will have it done in an evening . You will love the heat between the main characters , you will need a fan to cool off with.  I can't wait to see more from this author. So if you want a good start to a series, check it out .
Posted by BOOKS TO CURL UP WITH at 9:50 AM