ITS SIN AND SUFFER DAY TODAY

Welcome to Friday all , I can't believe it is the end of January all ready. Today we are going to review SIN & SUFFER ( PURE CORRUPTION book 2) by Pepper Winters. 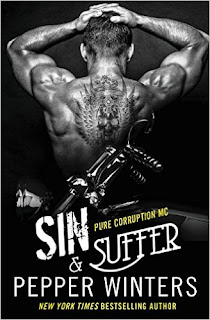 "Some say the past is in the past. That vengeance will hurt both innocent and guilty. I never believed those lies. Once my lust for revenge is sated, I'll say goodbye to hatred. I'll find a new beginning."

She came from a past Arthur "Kill" Killian never forgot. She made him sin and made him suffer. She tugged him from the shadows and showed him he wasn't as dead as he thought. And with her resurrection came betrayal, deceit, and war.

But then they took her. Stole her. Imprisoned her.

Now Kill's carefully laid plans for vengeance are complete. He craves action, retribution-the blood of his enemies. War has begun. War is all they'll know until they've paid their penance. He will get her back-and rewrite their destiny . . .


MY REVIEW
This is a hard review for me to write because I love the author and loved her other books to death. But I am confused on my feeling for this book.  I read Ruin & Rule and liked it and really wanted to read Sin & Suffer to find out what damage Kill was going to do and if he was going to save Cleo.
Will they survive .
I wanted to love this book but I just couldn't , the characters to me seemed off , I was expecting lots of tension and hot sex but I just didn't get it in this book . The characters just seemed a bit off to me and I just couldn't really get into the story line. Cleo being taken by Rubix  , to what end was that for . I honestly thought that the Rubix/ Cleo story line would of gone on longer . I didn't get that part of it . I understood to drive Kill crazy but I wish it would of lasted longer . It would of added another dimension to the story line . I did feel like the book was drug out , the first part just seemed so long and the second part of the book had me confused oh so confused .
I did like Kill an Cleo together but their sex was kind of boring to me. I know its a book but it just seemed like blah. The relationship was good but they both seemed to be childish at times . They argued as much as they had sex lol. and was a lot . I think they would of been a very hot couple if they had just been a little tougher . Cleo needed to be let in on things , so she didn't have that doe in the headlights look whenever Kill was talking. I kind of wanted to slap her a couple of times and tell her to grow up.  Kill needed to be more alpha especially when it came to protecting Cleo . Would of love to  see more of him and his dad, watching him kick his ass. The other characters were good and helped out but some were confusing as well.
Over all I did like the book, it brought Kill and Cleo's story to an happily ever after . The author did a good job wrapping it up nicely . I just wish there was more to the story . I love this author and I  am glad I read to find out if they survived .  I just wish that I could love it .