Good Sunday all , today we are going to review a new graphic novel, Starve by Brian Woods 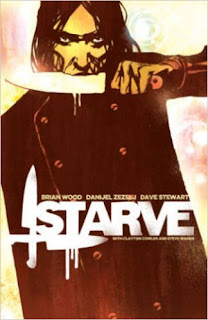 Once the world's most famous chef, Gavin Cruikshank's been in a self-imposed exile for years. His little foodie television program has since evolved into STARVE, an arena sport that pits chef against chef for the pleasure of their super-rich patrons. It's a stain on a once-noble profession, and Chef Gavin is ready to go to war to stop it. Two things stand in his way: his arch rival Roman Algiers, and his adult daughter Angie, who probably just wants her dad back and acting normal.


MY REVIEW
Starve is the combination between a reality cooking show and all out arena war fare . Meet Gavin Cruikshank a world famous chef in exile . He is dragged back to his show, which has turned into a sport . Where he is pitted against other chefs to one up each other . Will they survive and will his daughter get her dad back.
I was really surprised that I like this books as much as I did. It is really dark and brooding . There is a lot of internal dialogue from the main character . The grittiness of the illustrations and the story will take you to a place in the near future where the lines between rich and poor is very visible . The artwork works so well with the story line. Some people may not like it but I thought it went well . The story also entwines the lives of Gavin, his ex wife and their daughter . Also Gavin's arch rival and chef Roman Algers .  They all seem to pull him in all different ways . There is only one thing that kind of bothered me . The clinginess of his daughter , she didn't see him for a long time , why was she so clingy.
Over all I really liked this graphic novel and can't wait to see what happens in the arena. The characters are dark and the story line is gritty . So it isn't for those who like happy go lucky stories . This one will leave you slightly shaken but wanting more .