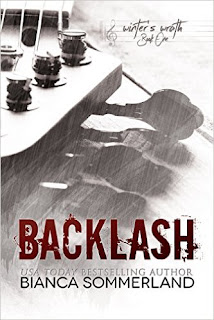 Outcasts, black sheep, those who never fit in anywhere. Winter’s Wrath belongs to them. Every single member of the band rejects the norm when it comes to music.

They won’t settle when it comes to love.

Alder Trousseau, the lead guitarist in a band that owns his heart and soul, has always stood in the shadow of a man he hates. Braver “Brave” Trousseau, the voice of Winter’s Wrath.

For the success of the band, they have to work past their animosity, but that’s difficult when they have the same taste in women. And men.

Sex is a game to Brave. A game that might leave the people Alder cares for completely broken. Unless he claims them for his own.

If he steps out of the shadows, he’ll have no choice to play. To win.

On stage, the drama drives the fans insane. The songs they sing are a blood racing, body moving, war cry. But the very real battle taking place between the snares and the mic might tear the band apart.

MY REVIEW
First things first why oh why can't I ever find hot long haired, sexy as sin men in the cookie aisle of my favorite grocery store . Bianca can sure make shopping for groceries fun and well hot .
I have to admit I got sucked into this story from the second page . The author has a unique way of writing that will suck you in and keep you turning pages all night long. The story is based on the band Winter's Wrath on stage they command the attention of everyone but off the stage they are as tight as anyone can be . But as you read you find out more about the band and the secrets hidden and the quilt that everyone is carrying around.
I have fallen in love with the characters in the band . Alder is the reluctant leader of the band keeping everyone safe and under control. But he is lonely, knowing he wants someone but he is in love with someone else. You see him as well some would call a doormat to his brother Brave . Brave is so arrogant and selfish. You really want to kick his ass around the bus a few times . When Adler finds Danica things start to change and we see Adler grow up and start becoming the man the band needs to get them through all the chaos. Brave is the arrogant one and so selfish , he treats everyone like shit and does what ever he wants . The typical bad boy of rock and roll , until you start reading into his character and you find him to be a small scared little boy , with the weight of the world on his shoulders . You actually start to see him grow up and be the hot sexy man you want him to be . Danica to me seemed a little naïve at the beginning . She did everything for her career and seemed like a puppet to her manager. As she hung around with the guys you see her get a back bone and stand up for herself . You also see her taking on the mother role for the young drummer Tate. They have the cutest relationship, like brother and sister sometimes . The rest of the guys in the band are such a mixture , you know you will fall in love with at least one or two of them and they may break your heart in the process .
I have read a lot of rocker books and they fade in the light of this book. The author adds her own twist on the story making it stand out . The added mystery of what happened to Adler's and Braves older brother and the mystery that surrounds the stalker just ups the ante on this story . There is plenty of sex also , m/m, m/f/m and m/f going on .  It will make you kindle melt and make you warm in all the right spots . You will laugh , Tate's cookie addiction , and cry when everything comes to light . I will admit I did have a good cry . If that isn't enough to keep you reading , the twists and turns will . So if you want a great book with hot Alpha men and lots of good rock . Check it out , you will love it
Posted by BOOKS TO CURL UP WITH at 11:53 AM