HAPPY HUMP DAY ALL Today we are celebrating the release of T. Strange's new release . The second book in her UNDEAD CANADIAN series . Check out MY ZOMBIE FIANCE . 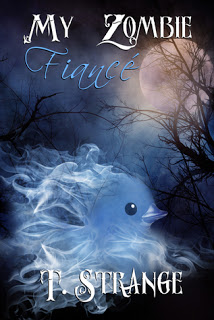 Edward Grey is no stranger to the undead; since raising his cat as a zombie when he was a child, he and his mentor Mariel have explored and developed his power as a necromancer. Despite everything he's learned, as a necromancer and a medical student, he's never encountered a ghost.

While Mariel is unreachable in Haiti on mysterious business, a ghost wakes Edward in the middle of the night, claiming to be his grandfather. When the ghost offers to teach him about this different form of un death, Edward has little choice but to trust the spirit.

After receiving a phone call from a young girl claiming her father is possessed, Edward and his Undead Canadian fiancé, Kit, must travel to an acreage in Kingston…Ontario.

The haunting proves far more complicated than Edward could ever have guessed, and he finds himself pitted against an ancient evil determined to engulf everyone on the farm.

Edward's love and connection to Kit will be tested, and his necromancy stretched to his limits as he has to find—and destroy—a twisted spirit more powerful than anything he's ever encountered.

ABOUT THE AUTHOR
T. Strange didn't want to learn how to read, but literacy prevailed and she hasn't stopped reading—or writing—since. She's been published with Torquere Press since 2013, and she writes M/M romance in multiple genres, including paranormal and BDSM. T.'s other interests include cross stitching, gardening, watching terrible horror movies, playing video games, and finding injured pigeons to rescue. Originally from White Rock, BC, she lives on the Canadian prairies, where she shares her home with her wife, cats, guinea pigs and other creatures of all shapes and sizes. She's very easy to bribe with free food and drinks—especially wine.

She can be found on her blog, Facebook, Twitter, and Tumblr; or you can email her: author.t.strange at gmail.com