Hey guess what its Wednesday and I have just finished the unbelievable great book by a new author to me Matthew S. Cox and he has written the vampire book that makes all other vampires sparkle . Let me introduce you CHIAROSCURO The mouse and the candle 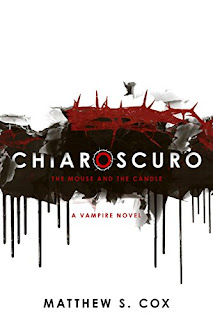 God’s will be done.

After eleven years as a priest living by these words, Father Antonio Molinari never imagined who would teach his strongest lesson of faith―a vampire.

Part of a secret order within the Vatican, he is sent to investigate and debunk supernatural events. A case of possession brings him to the French countryside, where two local clergy offer him the chance of a lifetime. They claim to have captured a vampire, and beg his expertise in helping them study the fiend.

But when their monster turns out to be a little girl, cursed to spend eternity hiding from the sun, he cannot bring himself to destroy her. The priests, mistaking his compassion for diabolism, panic and his efforts to protect an innocent child prove fatal.

He awakes caught between light and darkness.

Hunted by the Church he once served as well as the fiends he once destroyed, Father Molinari clings to the faith that there is still room for him in God’s plan.

But God is quiet, and the darkness so tempting.

MY REVIEW
When I was first told about this book by a great friend of mine I was intrigued and a little scared to read . My first thoughts were another vampire book what blood sucking alpha male will they have and what unsuspecting young woman would they sick him on . As I read the book blurb for the book I was like wow , this is a totally new take on the Vampire and the repercussions of walking between the light and the dark. This book is more then just your run of the mill vampires and the young girls that fall for them . This is about two souls that battle the demons that hide in the dark as they walk the path of light .
The author has written two very strong lead characters for we have Father Antonio Molinari, a Vatican priest that is sent out by a secret order to deal with demons and all things evil . He is called upon to rid the small church of its greatest evil . A young girl named Sabine, she is more then just an innocent girl she is also a vampire . At the beginning of the story we Father Molinari as s strong priest that knows right from wrong . good versus evil and is willing to help rid the world of the evil. As we see him meet Sabine you see him take a step back and really look at the young girl . He wonders how one looking so innocent be so evil. He takes on a fatherly role to her as he tries to figure her out . But things change and one fateful night throws these two characters together and keeps them together.
Sabine is the little girl that everyone wants dead , she is innocent and so sweet, but she is also cunning in the sense of she will charm you with her sweetness. When we first meet her, she is held captive by the church in a dungeon. She charms Father Molinari from the beginning . After the fateful night they become inseparable and travel through their long lives together . Father Molinari becoming a father figure to young Sabine. They help each other staying on the side of the light and fighting the temptation to succumb to the darkness that is the evil . Along the way they meet people that help them and hide them during the day and some that want to kill them .
This book is to me more then a vampire book , it is also a book on the love between a father and a daughter. The trials that they go through to keep together . The author takes us on a epic journey that's starts in the year 1885 right up to today . We get to see them change and fight the darkness .
I must say this is one impressive well written book . The author really knows how to set the stage for his characters . You really start to care for these two characters and you will shed a tear of two as you read . This is a long book but you will fly through the pages , because you just can't put it down. I had a book hang over after reading , I kept saying to myself just one more chapter and it turned into 5 or 6 . So if you want a epic read this summer please check out this book . You will not be disappointed .
Posted by BOOKS TO CURL UP WITH at 9:24 AM