Good Monday all, first day back from a whirlwind vacation. Today we are going to review JUSTICE LEAGUE vs THE SUICIDE SQUAD , by Joshua Williamson and ten other authors . 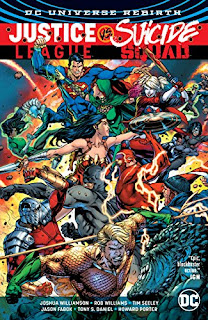 The members of the Justice League are Earth's most powerful and famous superheroes…but they aren't the only team in town.

The Suicide Squad strikes from the shadows and does the jobs too dirty for superheroes to handle. Under the iron fist of Director Amanda Waller, these monsters and maniacs have operated in total secrecy…until now. Batman is on their trail and the Squad's existence isn't something he or the Justice League can tolerate. It must be shut down.

But while the heroes and antiheroes are distracted fighting each other, twisted mastermind Maxwell Lord assembles a nightmarish army of DC's deadliest villains to take out both teams!

This is the first major cross over of two of the biggest action heroes and villains I have seen in the rebirth genre.  This is the one to read, The JUSTICE LEAGUE the best heroes out there and the SUICIDE SQUAD  the best villains out there . When they clash it is EPIC .
The story is based on when the justice league is captured and in need of help . Enter the SUICIDE Squad to do what they need to do . There are some epic fight scenes between them . I cheered for each of them but when it came to WONDER WOMAN  and HARLEY QUINN. I was at a loss of words . I really wanted both of them to come out on top but alas only one could win but not going to tell you. But when push comes to shove . Can they come together and work as a team to help thwart the evil  Maxwell Lord and his evil minions that he has mind control over . Will they survive and will they win against the evil ones .
I have been a Justice league fan for a long time  and I fell in love with the Suicide Squad when they were introduced . So when I  found out they were going to battle in the newest rebirth . I was doing a happy dance . The authors didn't disappoint this girl . Each story was well written and the graphics are awesome . They remind me a bit of old school colours with a punch to bring them up to date .
I couldn't put done this  graphic novel down , I know it is a comic but this girl loves all things comic and so wasn't disappointed . Each and every story gave me goose bumps and had me cheering for each and every character I love . I had this novel read in a couple of hours cause I was so hooked . This is a great addition to anyone who loves comics and loves the JUSTICE LEAGUE  or THE SUICIDE SQUAD . You will want this book to add to your collection .