Happy Wednesday all . Today is zombie Wednesday but these zombies have a twist . Let me introduce you all to EMMA'S ROSE the cave by Eric A Shelman 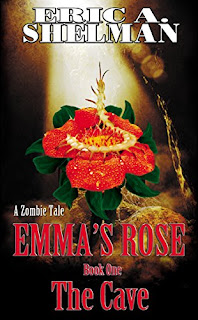 Wealthy philanthropist Arthur Wells, in need of a family getaway with his wife, Joan, and his daughter, Emma, arranges a trip to Romania. His intention is to explore an ancient cave system he read about, located in Constanta, on the Black Sea coast.

The name of the cave, unearthed in 1986, is Pestera Movile. It has been sealed from the light of day for over five-and-a-half million years, preserved beneath more than 20 meters of clay. Yet, despite the toxic environment and the lack of light and oxygen within, life forms thrive - all of them blind and colorless. Many are carnivorous.

Most are found nowhere else on Earth.

In this harsh, chemosynthetic environment, Arthur stumbles across something he hopes will advance medical science. Unbeknownst to his guide, he takes a sample of the strange flower.

Arthur Wells has no way of knowing what Emma's Rose is about to unleash upon the world.

MY REVIEW
Ok I have read almost all of Eric's books and was excited to read his new zombie book . Emma's Rose . I was blown away with the book started out . In a cave in Romania where it has been hidden from the world . With its toxic ecosystem not many people have ventured down there . While on a holiday Arthur and his family decide to head to Constanta on the black sea coast .  After venturing down into the cave he is in awe of the life that is surviving down there . Most of the specimens have never seen the light of day . When stumbles into part of the cave that have never been opened before . He finds a beautiful flower which he decides to take home, hoping that it will bring the cure to cancer or some other deadly disease. But what he inadvertently done is, well not going to tell you, you have to read the book .
In this series , just like all his series , you will find characters that are relatable to you and you will start to really care for them . In this book it is Arthur , this man was so full of himself at the start of the book . He came off as kind of arrogant and he thought he could do anything . But as his world is falling apart around and his family is dying . You see a change in him you see him become a more humbled man that wants to stop what ever is happening in the end of the world . You also see him toughen up as he is humbled .  The other two relatable characters are Ramona and Harvey . April is another character you will like . She gets tougher and stronger as the story goes on . But the main character the rose is one sinister flower. Trust me after reading this book I am going to look at roses differently from now on .
This book had me on the edge of my seat the whole time . The author has built a different type of zombie that really works and also the new delivery system of the virus makes you never want to get flowers again . Just trust me on this one people .
The book is character driven you will cheer for them and you will laugh with them . Most definitely you will cry for them and with them . I read this book in one sitting, well into the night . I just couldn't put it down , it kept calling me back just to read a couple more pages and 3 chapters later I was like wow .  I so can't wait to find out what happens with these characters . So when is book two coming out , can't be soon enough for this girl . So if you want a good start to a hopefully great new series . Check out EMMA'S ROSE the Cave by Eric A Shelman . I promise you , you will not be disappointed and you will be begging Eric for the second book .