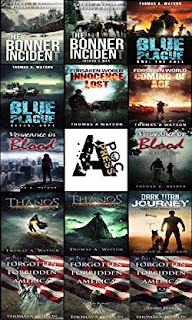 Well today we have another victim in the NOVEMBER TO DISMEMBER  for reading zombie . Thomas Watson  and his book VIRAL MISERY.

Tell us about yourself.
I am Thomas A Watson. I’m an Army veteran, 19 Delta. Tina is my wife and mother of our three children. We have two granddaughters that we still would like to know, Why grands didn’t come before kids? We would have just had grands if that was possible. I have always loved to read, and love what I am doing now. I am not big on social media, I do get on Facebook sometimes, but normally leave that up to Tina, she keeps me up to date on what  all is going on. She’s like my newscaster. We recently moved back to the south from Montana. Oh my! I was reminded in July why I left this humidity. We are looking for a place in Northern Arkansas/ Southern Missouri to move soon. We have several conventions lined up in the near future, I think St Louis Missouri is the next one.


Tell us about your books:
I just released one I co-authored with my wife Tina.  Viral Misery
. It’s been hanging in the top 10 of Amazon’s medical fiction hot new releases. It’s been in the #1 spot also.
My favorite series--since I have always loved fantasy is my series  Thanos, Many overlook this one when they see fantasy. Don’t let that scare you away. It’s action packed. The Bonner Incident this one is about civil asset forfeiture, I wrote this one with a buddy that is no longer with us, and that alone will always make this one dear to my heart. Plus it’s something that could and has actually happened in some ways.
What are you working on right now?
I have three that I’m working on right now. The third book in  Vengeance in Blood series. Picking up on Dark Titan series, and book four in Forgotten Forbidden America series

Do you hide secrets in your books that only a few people will know? Oh yes!
Do you have any writing rituals that you do when you sit down to write?
Not really. Now I do have to be away from everybody, because the least little thing disturbs me. I listen to a variety of music while writing, and will play video games prior to a big action scene for inspiration and to see if some of the things I write could be possible.
How do you pick names for your characters?
I use a random name generator on most. I have a few characters, for example Bessetta in Vengeance in Blood, Tina researched that name so she came up with that one. I have a couple of names that will be in the next Forgotten Forbidden America, they won a memorial auction for Joyce Stokley and got to pick a name for that one.  Brandy Yassa and Rob Brumbach I think you will like the characters I chose for your name or the name you picked.

What is the one thing about the writing / publishing process do you like and what part do you dislike?
I’ll be honest, all I have to do is write. Tina takes care of everything else. I can promise you, without her doing all the publishing aspects of this, I’d be working 12 hour shifts in an Emergency Department somewhere.

If you get a bad review how do you deal with it?

Some people may not like this answer. I don’t read negative reviews. I learned after my first book was released I had to stop reading those reviews. I found myself changing up my writing style to make the reviewers happy. I do look and see how many reviews I have. Now that don’t mean for folks to stop writing reviews. Those reviews play an important role in getting books out there. So write those reviews. I do appreciate them, just like all of us authors do.

If there was one thing you could change as a child or teen ager to help you become a better writer?  What would it be? Well I was an avid reader as a child and teen. A lot of the things I did as a teen and young adult have played a huge role in some of my books. My series Forsaken World, well what can I say….. I had fun as a kid.


Do you believe in writer’s block? I wouldn’t call it writer’s block, but I will say there have been times that I have been disturbed, that it took me a couple of weeks to replay that scene in my head to get it on paper.


NOW FOR SOME FUN QUESTIONS


COFFE TEA OR OTHER? Coffee in the morning, a guy has to be regular you know. Diet coke the rest of the day.


Have you ever googled yourself? I haven’t in awhile, but not long after Blue Plague  was released someone told me that they googled my name and found it. So of course I had to go check it out.


If you had a super power what would it be? Do I have to answer this one? Mind control, just kidding. I’d like to fly and not in an airplane.


Favorite book and author?  Now that is a tough one because I have a bunch of books I love. The Belgariad series by David Eddings is one of my favorites. Another I would have to say is Shogun because I read it once a year.


Last but not least


What would you tell any aspiring writer out there? Write, write, write. Write it as it plays out in your head. After you finish then go back and read it. Don’t read it as you write. You will never get to the end if you write it, read, correct. Just put it down then go back after you are finished. You may move or delete whole chapters in a book, and add more. That’s okay, once you’ve got it all down, just don’t try doing this while you are trying to write it.


Where can people find you at? In my little writer’s nook. Oh! You mean on here my bad.

Facebook Author page: https://www.facebook.com/thomasawatson/
Posted by BOOKS TO CURL UP WITH at 8:40 AM