Good Friday all today we have the next book in the Charley Davidson series . THE TROUBLE WITH THE TWELFTH  GRAVE by Dayrnda Jones . 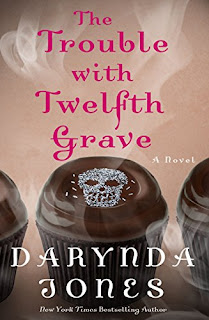 Grim Reaper Charley Davidson is back in the twelfth installment of Darynda Jones’ New York Times bestselling paranormal series, The Trouble with Twelfth Grave.
Ever since Reyes Farrow escaped from a hell dimension in which Charley Davidson accidentally trapped him, the son of Satan has been brimstone-bent on destroying the world his heavenly Brother created. His volatile tendencies have put Charley in a bit of a pickle. But that’s not the only briny vegetable on her plate. While trying to domesticate the feral being that used to be her husband, she also has to deal with her everyday life of annoying all manner of beings—some corporeal, some not so much—as she struggles to right the wrongs of society. Only this time she’s not uncovering a murder. This time she’s covering one up.
Add to that her new occupation of keeping a startup PI venture—the indomitable mystery-solving team of Amber Kowalski and Quentin Rutherford—out of trouble and dealing with the Vatican’s inquiries into her beloved daughter, and Charley is on the brink of throwing in the towel and becoming a professional shopper. Or possibly a live mannequin. But when someone starts attacking humans who are sensitive to the supernatural world, Charley knows it’s time to let loose her razor sharp claws. Then again, her number one suspect is the dark entity she’s loved for centuries. So the question becomes: Can she tame the unruly beast before it destroys everything she’s worked so hard to protect?

MY REVIEW
Welcome to the twelfth installment of Charley , Reyes and the rest of the gang . I must say that this series is just getting better and funnier . I love the coffee swigging sassy pi / grim reaper . When we left off Reyes , the sexy man and god . Blew out of the God glass in his true form and is on the hunt for their daughter . Doing mass destruction in his wake . Charley is out to stop him at any cost . Not wanting to kill her husband but is willing to do it to save their little daughter . Will they survive the evil and come back together .
This is the 12th book in the series and it was a good fast read for me . I sat down and got sucked into Charley and the guys again. The story took off with a bang and just kept on going , The characters are getting better and better with each book . Charley is such a kick ass woman and you see her actually struggling this time . She doesn't want to hurt her love but she will if she has to . Reyes is still hot and sexy as sin but the evil side of him is doing everything in his power to hunt for their daughter . But all isn't what it seems with Reyes and you will want to kill him then in the next breathe you will want to climb him like a monkey and have your way with him .  Cookie and the gang are also back , doing what they have to do to keep Charley on the right path . I feel so bad for Garrett though he goes through so much in one scene in the book .
The series is one that I will always love the stories are hilarious and the characters are quirky and so much fun to read .  The only thing I found that it was just a little short . Started and then bang it was over . I just wish the author just flushed it out a little bit more . Other then that I loved the story and have never laughed so hard in awhile . So if you want a funny series check out Charley Davidson series . you will not be disappointed .