Woohooo its Friday , and I am glad it is the start of weekend . To start of the weekend right we have a cool series for you to read . I am really starting to like this author and his writing . DIVISION ZERO  by Matthew S Cox. 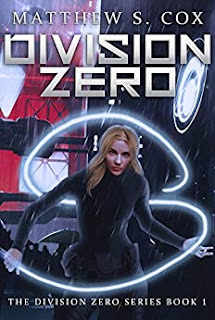 Most cops get to deal with living criminals, but Agent Kirsten Wren isn’t most cops.A gifted psionic with a troubled past, she possesses a rare combination of abilities that makes her a powerful weapon against paranormal threats. Adrift in a society that fears people like her, she feels alone in a city of millions.In 2418, rampant violence and corporate warfare have left no shortage of angry wraiths. Most are little more than fleeting shadows or eerie whispers in the darkness, but every so often, one gathers enough strength to threaten the living.A series of attacks by androids known as dolls leave the normal police baffled. Unable to explain what made the machines malfunction, they punt the case to Division 0. Kirsten’s investigation into who – or what – is behind the random murders soon makes her a target for corporate assassins.Despite her past, and the cynical city around her, she clings to the belief that no one is beyond redemption. Alas, the killer is desperate to claim as many innocent souls as possible, and one might just be hers.

MY REVIEW
Welcome to the future 2418 where being a police officer means that you are trying to keep the rampant violence down . But if you are also a police officer that is also a psionic you will be battling the ghosts . Meet Kristen Wren a young psionic and police officer . She has a talent to track and kill ghosts .. When a series of attacks puts Kristen on the case . She is now in the cross hairs for corporate assassins and a vengeful ghost . Will she survive to close the case or will she become one of the killers victims .
I truly fell in love with the main character Kristen , you really feel for her . She has been through hell and back with her family . Even in the big city she feels alone and actually kind of scared. Her special powers have her chasing ghosts and she well doesn't like it . She has so many feelings and sometimes she is scared . You just want to wrap her up in a blanket and hug her tight .  As you read her though she really does become a strong character and she really does come into her own . With her best friend Nicole and Dorian keep her grounded and help her figure everything out . Oh and there is something special about Dorian that kind of made me go wow .
This book is a mix of sci fi and paranormal . Which the author mixes quite well. The characters are very well written and complex . You really feel for them and want to care for them . The author has a way with words and can really paint a picture .But there were just a couple of times I felt like I needed to look up a couple of words . other then that this story had me sucked in by the second chapter . This book so has a blade runner / ghost buster vibe . Its dark and gritty with some comic relief . You will get sucked in  and want to figure out what the heck is happening along with the rest of us . So add this book to you fall reading list . You will not be disappointed
Posted by BOOKS TO CURL UP WITH at 7:51 AM