Today we have another release day book . ANGEL ( a sacred oath series book one ) a reverse harem by HP Mallory 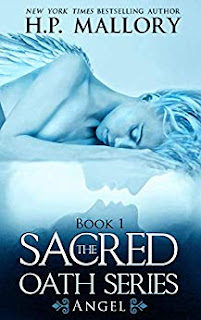 “If the angel has no wings, there’s no amount of my shadow magic that could make them appear,” I say.
It takes the sprite a moment or two to understand what I’m getting at. Once he does, his eyes go wide and he begins shaking his head, holding up his hands in obvious supplication.
“Look, Shadow Prince, I dunno why yer magic ain’t workin’ but I’m tellin’ you what I saw. This angel got her wings,” the sprite says, but he appears nervous. “You’ll see. Besides, it ain’t like yer jist gonna leave her here, are ya?” He glances around and seems to become frightened by his surroundings.
The Shadow Realm is hardly safe, littered as it is by bloodthirsty creatures and the undead. Were I to leave the sprite and the girl here alone, they would undoubtedly be killed within a half hour, at most.
And even I’m not that horrible.

I don’t know who I am or where I came from.
The only thing I do know is that I’m running from something.
And there’s a voice inside my head that guides my every move…

When I’m taken prisoner to be thrust into a lifetime of prostitution, I learn I’m an angel. Yes, I bear the markings on my back: markings that reveal my wings have been removed. But when my only ally, a foul-mouthed sprite, insists my wings are intact, I realize the danger I’m facing.

I need protection. And that protection can only come from three magically powerful men who were destined to protect the balance between shadow and light:

At one time there were four but Variant, the King of Light, grew greedy and usurped control for himself. He banished Cambion to the fae realm and Dragan to the shadow realm. And he murdered Baron.

And now Variant is after me.

MY REVIEW
Eilish doesn't know where she came from or even who she is . She is thrown into a life of prostitution , she learns that she is an Angel but  she has no wings . She needs protection and that comes from 3 very different magical men . Will they survive what is after Eilish

This author can write some very great characters and these characters are no exception . They are well written and complex.  Each of the male characters is different but yet deep down they are the same . Dragan is the Gargoyle and the king of shadow . He is dark and brooding and lets say that he is sexy as sin . There is something about him that will draw you in and make your heart beat a little faster . Cambion is and elf and the king of nature . There seems to be a lightness to him. I liked him  I just wanted to climb him like a spider monkey and then there is Baron a vampire and the king of death . He is well a vampire , all sexy and brooding but also a killer that you don't see coming .
Eilsh is timid but also in the same breath strong . She gets knocked down but keeps on going  . She could be one of my favourite new characters .

This story had me hooked from the second page. The characters are well written and i found I was caring for all of them at one point in the book . There are twists and turns through out the book that will keep you on the edge of your seat . This is my second reverse harem book and I must say that i liked it . There is a mystery and intrigue and your kindle will get warm with the romantice sexy scenes that go on. You should add this book to your fall reading challenge . You will not be disappointed .
Posted by BOOKS TO CURL UP WITH at 8:37 AM