It is release week for one of my favourite and funny authors Robyn Peterman and her twelfth book in her HOT DAMNED series . A FSHIONABLE FIASCO . 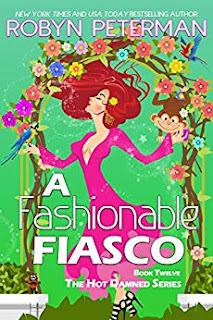 It’s not nice to mess with Mother Nature. Really, it’s not.

This is simply not my week. Finding out I can’t cook is appalling. My luncheon with the big-boned Immortal socialites went to Hell in a handbasket. I’ve been hoping to join the Fearsome Five and make it the Psycho Six. However, the chances of that happening now are looking slim. Of course, I could force my way in since I’m Mother freakin’ Nature, but I want to be accepted for being me and—because I’m fabulous.

It’s bad enough my two sons, God and Satan, are driving me to crazy town while my best friend, Mr. Rogers, is riding in the backseat having a breakdown. It’s definitely not a beautiful day in the neighborhood of Purgatory…

God has taken up softball and is impossible to get a hold of just when I need to chat with him about the impending end of the world.

And Satan. Satan has agreed to grocery shop with me so I don’t show up at his next poker game in Hell and pole dance. See I’m certain if I find the famous chef Betsy Cocker and learn to cook I can halt the end times. According to the Internet, she resides in aisle three.

What I really want is to be left alone with Bill—the love of my Immortal life. And for the world to not come to a cataclysmic and fiery end because that is unacceptable. God tells me the end times aren’t on his schedule, but the strange days afoot and the physical changes in Bill tell me otherwise.

And I would know. Normally, I create all the strange days.

There is no storm strong enough to defeat me. Ladies and gentlemen, I’m Mother Nature. I am the mother humpin’ storm.

And it’s not over until I say it’s over.
MY REVIEW
Never accept a dinner invitation from Mother Nature , the poor woman can't cook to save her life . Well until the day she has a tea party for some of hells socialites . She ends up saving the world from the antichrist .  The only way that she can save the world is learn how to cook and she wants to enlist Betsy Cocker  who resides in aisle three of the grocery store. When she is told to save the world, her and her band of co horts hatch a plan to save the world and save her love from the seven seals .  Will she survive and will the world survive Mother Nature .

I truly love the characters in this book and it was about time that Mother Nature and Bill got their own story . Mother Nature is a riot, she is always causing havoc where ever she goes . She has a hair trigger that will make things blow up with a flick of a finger . She really comes off as a dumb blonde even though she is a red head . There is more to her then a bad cook and fickle pole dancing woman . She is strong when she has to be and she loves with her whole heart and takes care of those who she loves . Just don't let her cook for you . God and Satan are back trying to help their mother out . We really get to see them as brothers in this book . They even have a smiting fight where things get a little scorched .  There are so many characters that are hilarious and so well written . You will love them all . I know I did .
Finally Mother Nature got her own book, which I was so excited to sit down and read . Even though it is the 12th book it stands up . The characters are well written and complex . You will love them . There are so many funny parts in this book that will have you laughing so hard tears will be running down your cheeks . There is also a few sad parts that will have you wanting to hug them . This is a fast fun read . The reason I took off a half a star is the ending . It was kind of anticlimatic . I was expecting a big food fight or something . It just seemed to end . I was kind of let down with the ending . Over all i loved this book and would recommend it to you to add to your summer reading list
Posted by BOOKS TO CURL UP WITH at 7:45 AM