Good Monday all , today is a fog filled day, a great day to snuggle down and read . Today I have a graphic novel for you . JUSTICE LEAGUE/ AQUAMN DROWN EARTH by Scott Snyder. 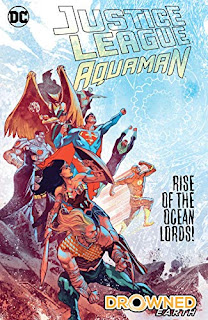 In the aftermath of the Justice League’s battle with the Legion of Doom, an armada from the stars has come to plunder the Earth and its seas. With powers beyond comprehension, even Superman, Batman, Wonder Woman, Aquaman and the rest of the League’s combined might can’t stop these invaders. With nowhere left to turn, these heroes will have to turn to an ancient power to help them, one that even Arthur Curry fears unleashing. Collects Justice League/Aquaman: Drowned Earth #1, Justice League #10-12, Aquaman #40-41, Titans #28 and Aquaman/Justice League: Drowned Earth #1.

MY REVIEW
After the JUSTICE LEAGUE defeats the Legion of Doom . Do they get a break ummm no . An armada of alien ships come down to plunder the Earth's seas  The league can't defeat them unless they tap into an ancient power that Arthur doesn't want to unleash.

Going to say that DC has redeemed themselves with this run . Aquaman is usually the brunt of most of the jokes in the DC universe . They really do all the characters in this series .  Aquaman is the real hero of the story and he really does the story justice .

Scott Snyder has taken this run and made it epic series . The characters are well written and the story is tight and well written . I am such a DC fan and when i sat down and read Scott's run I was thrilled that the story took me on an adventure and the characters had me cheering . The artwork is good I do have a few issues with it . I think it could of been a bit better . The close up work is great but the wide panels leave a little to be desired . I am falling in love with DC again . So if you want a great run of JUSITCE LEAGUE  check them out .
Posted by BOOKS TO CURL UP WITH at 7:51 AM