Good morning all , its Wednesday of the first full week of being back to normal in 2020 . Today I have a great book for you and your middle school kids to read . THE ADVENTURES OF UBERGIRL. MY DAD IS A MAD SCIENTIST  by Matthew S Cox 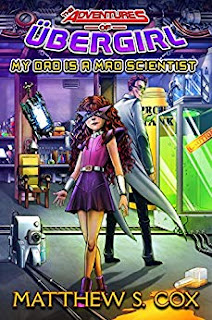 Saving the world isn’t easy. It’s even harder when you’re only nine.

Kelly Donovan used to be a nobody. Well, a smart nobody. Skipping ahead a year in school made her the smallest kid in fifth grade and a target for bullies in search of an easy mark. She tried to follow her father’s advice and ignore them, but it didn’t do any good. Escaping into her favorite comic books at least helped her through the day. Who needs friends anyway?

Sometimes, dreams find a way to come true, even if nobody asked them to.

Aliens bombard the Earth with gigantic glowing red crystals to restore its failing magnetic field. Soon after the seemingly benevolent invasion, Kelly discovers her wildest, happiest fantasy come to life: she has superpowers, along with roughly two percent of the population. Her strong good nature leads her to adopt the heroic persona of Übergirl. However, she has one major problem…

Her dad’s turning into a mad scientist.

It’s difficult to be a hero, especially when your father’s a bad guy.

MY REVIEW
What's a girl going to do, Kelly is a smart girl a very smart girl . So smart in fact that she was moved up a grade and that's where things start to get bad for her. Being the smallest in the class she is getting picked on by what I will call the mean girls . They have done everything to make her life miserable . Until the day comes when Kelly is at her lowest being hung up in a back pack . When aliens come to Earth with glowing red crystals . Kelly discovers that she has super powers. Which prompts her to become a super hero . She finds out how difficult it can be especially when her dad is becoming a bad guy.

What can I say about these characters . They are well written and you will fall in love with them . Kelly is such a sweet girl who has done nothing wrong except be smart. You will really feel for her . She is bullied every day cause she is younger and not the same as everyone else .  I love how she grows as the story goes on and with the help of her best friend she really matures . Being a super hero is pretty cool too . You will cheer for her through out the book . Her parents are well there are things that come out that will make you want to slap them lol . They are quirky but they are also sinister in their own way . Paige is her best friend and actually Kelly's champion , they are the same but not the same . I love them together .

This is a middle school age book but i seriously think that any parent would love to read it along with them . The author really tackles a few things that happen in school . Bullying being the hot topic at the beginning of this story . He doesn't dumb it down , he treats it very well . The author really what can happen when it happens . This isn't a heavy bullying story . Its kind of like the main characters back story and it kind of lays ground work for when she becomes a super hero .  This book is great for those who are a little bit older in middle grades . The story is complex and your kids won't want to put it down . There are some areas that will make you want to wrap Kelly up and keep her safe . Then there are the times you are laughing and screaming go Kelly go, especially the scene with the mean girls after she got her super powers . I can't wait to jump into book 2 and see where Uber Girl goes and how will she get her parents back from the dark side . So add this book to your kids reading list for 2020 . You read along with them, you will love it .