Good Saturday all , I hope that your weekend is going well . Today I have book two in the  Uber girl adventures ALIENS ATE MY HOME WORK by Matthew S Cox 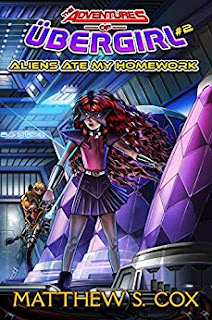 Kelly Donovan wants to save the Earth from aliens, but her plan has a serious snag—she needs to do it before bedtime.

It’s been a few weeks since the Nolmek scattered giant crystals around the world that unintentionally gave some people super powers. They also nearly eliminated war and shared technology to solve famine, drought, and pollution, so pretty much everyone loves them. Alas, the aliens didn’t visit Earth purely out of kindness.

They needed a primitive species to enslave.

Kelly discovers they’re speeding up their plans, already abducting people from the super-prison right out from under the cops’ noses, the same prison her mad-scientist father is stuck in. She’s desperate to protect him, but unfortunately, no one is willing to believe the Nolmek could be bad guys. Worse, they know she’s on to them.

If she can’t find proof of the aliens’ plan, stop the invasion, and be in bed before nine, she faces worse than the enslavement of humanity—she’ll be grounded.

MY REVIEW
Welcome back, several weeks later and all Kelly wants to do is save the Earth from the aliens that have landed . But the aliens have ulterior motives  after  cleaning up the pollution and stopping almost all war. They are now rounding up people to be slaves . Kelly and her best friend Paige discover the plans and want to save the earth but no one believes them . Now with the help of her friends Kelly is going to save the world and be home before nine or face something more then enslavement , being grounded for being late .

I simply adore these characters . Kelly is still the sweet young girl with a secret identity . She is caring and so lovable . She is stronger then she lets on . I simply love her and really connecting with her through out the book . This little girl has gone through so much and has come out smiling and happy . Her dad is in super prison and her mom is missing . She does amazing well . The Nolemek  are too sweet but they are hiding so much .  Trust me you will fall in love with these characters . Cheering Kelly and the gang on .

This story picks up a few weeks after the first book . The characters have grown a little and they have a complexity to them that a few good books have .The author takes us on a fun filled ride that will keep you laughing all the way through the book . It shows that evil isn't black and good isn't white . There are really shades of grey and you can always help out even if you don't have super powers .  There is also a sub story of best friends and how with a great friend on your side you can do anything . You and your kids will love these stories . So check them out . You will not be disappointed . .
Posted by BOOKS TO CURL UP WITH at 1:29 PM