WELCOME TO FRIDAY ALL

Welcome to Friday everyone, its all ready the weekend again. Today I have another new author to start the new year with . SCORPIO'S GRACE (book one in the Scorpio Grace Saga ) by Rosie Wyler- Owen 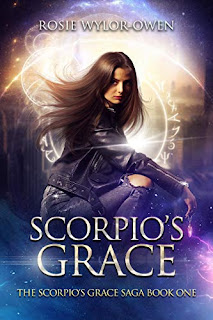 Dark and dangerous things are hidden in Freya Aldana's past. After twelve years on the run, they are coming for her. A druid with coveted powers, Freya is wanted by the most influential power-trafficking mogul in the supernatural black market: Gregory Kander.

Accompanied by her old flame and two fellow escapees, Freya investigates Paris' magic exclusion zones and London's back streets to discover what Kander has planned for her. Her freedom at stake, she turns to the Goddess Scorpio to grant her the strength to defeat her enemies and protect her young daughter. However, Scorpio has greater gifts in mind for her steadfast loyalty.

MY REVIEW
Freya Aldana has been on the run for twelve years . There are people coming after her a druid with powers that are coveted by most . She is being hunted by Gregory Kander an influential magic trafficker.  With the help of her old flame and some fellow escapees . Freya is out to figure out what Gregory wants with her .She turns to the Goddess Scorpio to help keep her and her daughter safe . But things aren't always what they seem and sometimes greater gifts are bestowed for the loyalty of one person
Freya is one of those characters that you can't help but love . She is a tough woman who will do anything to keep her daughter safe . She is a special woman with special powers that people want to steal . I truly liked her and what ends she would go to so that she can keep her child safe. These characters are very well written and complex you will totally cheer for Freya and the rest of the escapees . You will wish nothing but pain for Gregory Kander .

This is a very interesting read , I got sucked in by the end of the second chapter . The characters you will love or hate and the story flows very well . It shows the lengths a mother would do to keep her daughter safe and stop the trafficking of supernatural . This author as proven herself as a good story teller and I really can't wait to see what happens in the rest of the trilogy . There are just a couple of spots that kind of dragged just a little . It didn't hurt the story any and over all I really enjoyed the story . So if you want a great story check it out .