Happy hump day everyone. hope your week is going great.  Today I am going to review THE SURROGATES by Consuella Harris 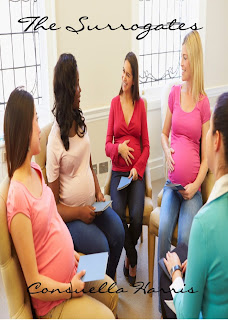 The deaths of two prominent businessmen on the same day of heart attacks is at first declared to be of natural causes. No investigation happens until a former law clerk hires an investigator to check into these murders, and the connection to the Lake Shore Parenting Group.

Three women became surrogate mothers through this group and their children were adopted by five couples. Once the information about their births is revealed to them, it sets in motion events none had anticipated.

The investigation into these families, their lives, and those behind the events changes everything they believe. Yet, there is still a murderer on the loose, unless the intrepid investigator can bring that person to justice.
MY REVIEW
OK going to tell you when you start this book don't start it late in the evening cause you will not be putting it down until the wee hours of the morning. I mean there is surrogate  pregnancies and murder and a detective wanting to get to the bottom of the murders. As they start talking to the surrogates we find out all the reasons behind why they chose to be a surrogate. Some of them very interesting. The stories of each surrogate is emotional, stirring and very complex. You really start care for these women. Their stories will make you think about what goes on when these women went through to carry that child and then give it away.
The author draws us in and keeps us turning the pages . She writes a very realistic story line and you know and feel what these women are going through . The way she describes a scene it is so realistic
Her characters are so life like and you just want to hug each and every one of them. But also there is a murderer running among them and that mystery needs to be solved also. The author weaves the murders seamlessly with the stories of the surrogates.  So you are also trying to figure out who the murderer is . There is just one little thing that bugged me is that it started out in the first person and then ends up in third person in some areas so that was a little bump.
Over all I recommend this book to anyone who want to read a story that is still talked about around the water cooler and what exactly happens to the surrogates and what they go through , with a dash of murder thrown in to keep you reading all night long
Posted by BOOKS TO CURL UP WITH at 10:54 AM