Good morning everyone, well holidays are over and now back to the real world . Which means for me more and more reading. So back at it and today we are going to review RUIN & RULE ( PURE CORRUPTION book 1) 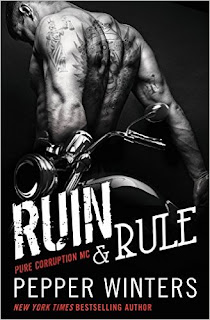 "We met in a nightmare. The in-between world where time had no power over reason. We fell in love. We fell hard. But then we woke up. And it was over . . ."

She is a woman divided. Her past, present, and future are as twisted as the lies she's lived for the past eight years. Desperate to get the truth, she must turn to the one man who may also be her greatest enemy . . .

He is the president of Pure Corruption MC. A heartless biker and retribution-deliverer. He accepts no rules, obeys no one, and lives only to reap revenge on those who wronged him. And now he has stolen her, body and soul.

Can a woman plagued by mystery fall in love with the man who refuses to face the truth? And can a man drenched in darkness forgo his quest for vengeance-and finally find redemption?

RUIN & RULE is a full-length book at 436 pages and ends on a cliff
hanger. Cleo and Kill's story continues in SIN & SUFFER.

MY REVIEW
Welcome to the Pure Corruption biker gang. Kill is the leader of the gang and Cleo is the girl he loved a long time ago and when she comes back to him  as one of the girls that are going to be sold. Things get difficult for them . She is like a ghost and he is broken man . As she tries to regain her memory , he helps her as much as he can. They are hunted though and he needs to find her before its too late.
I was so excited when this book came out. I was so excited woohoo another Pepper hit. I started reading it and it took me awhile to actually get into the book. I kind of struggled with the first 4 chapters. I got through the chapters and then it started to pick up for me . The story started to move at a faster pace and you could really get into the characters and the story line.
Pepper's characters are always so complex and twisted and tortured . Kill and Cleo are no exception.
Kill is the leader of Pure Corruption but he is also bent on revenge for something that happened in his past. He is hot sexy and just so tortured. You don't know if you want to hold him or throw him on the bed and take him hard . He is the ultimate alpha , and any girl would want to ride into the sunset with him.  Cleo./Sarah on the other hand kind of bugged me . I know she had amnesia but she just to me was so whiny and clingy.  She fought against the memories at some points through out the book . But you do see her toughen up as the book went along.
Pepper does take us on a ride , through the twists through out the book.  It is the first book in the series so I know there is a lot of set up but to me it just wasn't as dark as I liked from Pepper. I felt that it seemed rushed and not like Pepper from her other books.  Over all I did like the book and I can't wait for the second book in the series .
.