Welcome to Wednesday everyone . Hope you are all having a great week . Today we are going to review . THE LOST CITY THE CHAMPIONS OF DARKNESS .  Book three in THE LOST CITY SERIES by D.L COLON 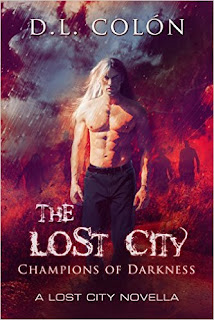 After the events in Puerto Rico, after the declaration of the New Savior of the world, Noryad King, defeated Raphael, Commander of the Destroyers and taken away his powers, Lucifer has been forced to send someone to look for a new Champion who would be able to defeat Noryad King.

While looking in Hell, the guard she sent found a long condemned prophet who was screaming, “The Champions of Darkness have been set free.” And he immediately reported back to Lucifer.

Who are these Champions of Darkness the prophet speaks of?

Is The Lost City Ready for this?


MY REVIEW
Welcome to hell , after the great war, Lucifer is forced back to hell. Boy she is not happy about that either . So she is on the hunt for a champion. The one demon or person that will be able to defeat the all mighty Noryad and his legions . She is having a rough time hunting for that guardian . Until the day the condemned prophet is found . Now Lucifer has to find the champion and will he fight for her and will  THE LOST CITY  by ready for the war to come.
I was happy to see that Lucifer got her own story , she really needed to have her story told. In this particular series the author has done a twist and made Lucifer a woman . Its nice to see that twist. She is the type of character that you like , you think she could be bad or good . But she loves to be bad its so much fun. She really likes to toy with the men around her, but really wants to win also. When she meets Osiris , she has found her champion. Not know that Osiris has a secret of his own. He is a warrior that will fight but for something in return . He is a strong character that blends nicely with Lucifer. Maybe a love match there in the end . Just a thought .
This was a nice quick read for me . The author shows us both sides of the war. Not just the good guys side , which to me was very intriguing. Showing them as more human then the names they have . The story flows well and has twists and turns that will make you WOW . It bridges what I think will happen in the next full length book. Give us more insight. So if you want to read a good fantasy series check out THE LOST CITY