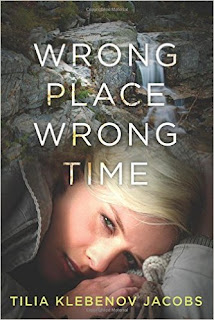 When Tsara Adelman leaves her husband and two young children for a weekend to visit her estranged uncle, she little dreams he is holding several local children captive on his lavish estate. Mike Westbrook, father of one of the boys, kidnaps her to trade her life for the children's. Soon Tsara and Mike are fleeing through New Hampshire's mountain wilderness pursued by two rogue cops with murder on their minds.

MY REVIEW
When Tsara receives an invitation to her estranged uncle's house for a weekend party . She doesn't realize that there is more going on there then the fabulous weekend . She is in the wrong place . She is taken hostage by a man , whose child is being held captive on the estate . He wants to trade her for his son. But there is more to this and soon Mike and Tsara are running through the mountains of New Hampshire trying to outrun two rogue cops out to get them. Will they survive and make sure everyone is alive at the end .
This is the first book I have read from this author . Lets just say I was not disappointed to say the least. The author took us on a roller coaster ride . We go between the mountains of New Hampshire and Mike and Tsara . To FBI  headquarters as they try and find them . It is so fast paced , I couldn't put it down. It was one of these books that actually gave me a book hangover. The characters are so strong but yet vulnerable. We see in Tsara a very strong woman who will do almost anything to escape. She will fight till the bitter end if she had to. She is comforted by her faith but also struggles at times .
Mike is a former marine that will do almost anything to get his son back. At the beginning you are really going to dislike him. He is the ultimate alpha that has some issues of his own to work out . But as you start to see Mike and come to understand what his is about and why he is doing this . You will really start to like this man. He seems broken and needs to be in control even when Tsara is trying to take the control into her hands . They seem to both want to be in control . Which you know usually ends up in disaster . Then there is uncle Cass the estranged uncle . He kind of gave me the creeps as I read . He seems like he is loved by the people in the small town but there is a darker side to him. He has kidnapped 6 young boys and has them on the estate . Then he goes on a murderous tirade when he is hunting down Mike and Tsara . So creepy so very creepy. Tilia writes very complex and layered characters that will make you think and will make you feel compassion towards them
This is a very fast paced book . It starts out with a bang and just keeps on rolling .  You will second guess yourself a few times . This book isn't just a very good mystery , you get to see how things go afterwards . You see the aftermath of what victims go through and how they handle it . Not always in a good way either. The story is complex and action packed, full of angst , mystery . action and regret. Then the redemption that comes with forgiving and peace of mind . So if you want a face paced book that will make you think and give you a book hangover. Check out WRONG PLACE WRONG TIME
Posted by BOOKS TO CURL UP WITH at 8:28 AM