I hope that everyone is having a good day on the Friday eve. Hope you guys are getting your summer reading list down . Today we are going to review FIERCE KINGDOM by Gin Phillips. 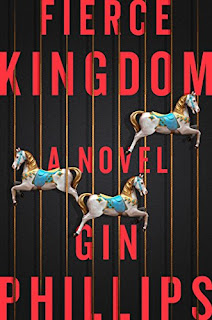 An electrifying literary thriller introduces an unforgettable mother and son, whose simple trip to the zoo one afternoon is transformed into three hours of terror and survival after gunshots ring out. What would you do to protect the ones you love?

After school on a late October day, Joan has taken her four-year-old son, Lincoln, to one of his favourite places on earth: the zoo. Just before closing time, as they need to go home, she hears some loud pops like firecrackers. Not thinking much of it, they head for the exit...until Joan realizes the eerie human emptiness means danger, then sees the figure of a lone gunman. Without another thought, she scoops up her son and runs back into the zoo. And for the next three hours--the entire scope of the novel--she does anything she can to keep Lincoln safe.
Both pulse-pounding and emotionally satisfying, Fierce Kingdom is a thrill ride, but also an exploration of the very nature of motherhood itself, from its saving graces to its savage power. At heart it asks how you draw the line between survival and the duty to protect one another? Who would you die for?

What would you do if you were trapped in a zoo with your child while there is armed men running around . This is the question Joan had to figure out with her son LIncoln one day in October.
I must say that I was intrigued when I started reading this book . I just had a little bit of a hard time at the beginning . I found that it just read a little slow and not much was happening .  As I read and got going into the book I was surprised how it picked up speed and the action took off . You kind of get sucked in and start worrying if they would get out and not get hurt . Will they be able to survive the ordeal . The book really came into its own towards the end of the book when Joan and Lincoln got to the others . They worked well together as a group. Then the ending just kind of went weird but it did kind of tie everything up
The characters grew stronger with each turn of the page . I liked Joan she was like a momma bear protecting her son . Lincoln was actually my all time favourite character  he was such a good kid and he loved super heroes . He did what his mom asked him with not much fuss. You never actually get to see the armed men you just hear the shots and the yelling .   They are phantoms while you read them .
Over all I did enjoy this book and the premise of the story is really good . I just had some issues with the lack of action at the beginning and never actually seeing the gun men .  This is the first book I have read by this author and actually I am looking forward to reading more of her work . So if you want a book that builds slowly and then take you to the edge of your seat . This is the book to add to your summer reading list
I was given this book by the publisher for an honest review