Good Wednesday all , hope your week is going well so far this week . Today we are going to review GIDEON'S CREDO by Ben Laffra. 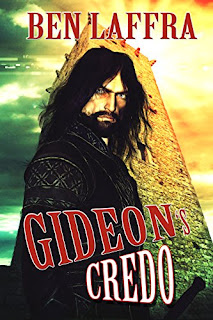 Gideon's Credo
A sequel to Gideon’s Passage
“Where injustice persists … Vengeance will follow”
Visualize sixteenth century France, a period that symbolized the very peak of the glorious European Renaissance; a period in which Architecture and Universities of Learning thrived that germinated the arrival of the ‘Free Thinkers’ who dared to think outside the square.
Temporarily relieved from the dangers of its Ottoman enemies from “without”, France turned its attention on its citizens “within”. What followed was religious intolerance. Religious zealots had the entrenched belief that it was their divine right to ruthlessly rid France of all opposition to Papal authority; that trailed bloodshed and misery in its wake for almost half a century. The Huguenot reformists were their “choice” of persecution.

This then is the canvas on which the story is painted. A narrative of war, of courage, and honour, of the deceit and brutality of humans, the raw passions and emotions of those who were caught in its midst … and one man’s desperate pursuit for justice for the innocent citizens of his beloved France that were being persecuted … and the price he paid for it!
His name was Gideon!

This is the sequel to Gideon's Passage, and I was so excited when I started reading . I loved Gideon's passage and I fell in love with the second book . This one is more of the injustice that was sweeping France at the time . Let me take you into the world of Gideon and his men. After returning from their wars they are very happy to be home . But all is not right in France , there is a war on religion going on.  A religious zealot is waging war and taking out all those who will not follow Papal authority. Will Gideon and his band of men help bring down the zealots and survive to see another day
Gideon is such a great character to read . He has a strong moral compass and is willing to help the downtrodden in a time of need . You can't help but cheer for him . He is the compass of good . On the other end of the scale there is there are some really creepy evil gentleman that will do everything in their power to keep the papal power in play, These characters are written so well and are so very complex . You really can't help but cheering for them and crying when you see one pass .  Yes I will admit I am very invested in Gideon . he is like my go to guy when I want to read a good story built on history.
The author takes us on a very emotional journey in this book . I read this book in an evening and I laughed and cried , boy did I cry. There is a part of the book I had to put down and walk away from for a bit because I was so heartbroken at what the author was putting Gideon and the guys through. This is a much more intense book then book one . We get to see Gideon in his home country where his wife is . We get to see him fight for what is right and good . The story flows of the  page, its like a movie playing in your head as you read . These are the types of books I love to read , its like they read themselves .  This isn't a stand alone  I suggest you read Gideon's Passage before you read Gideon's Credo . Just to get yourself immersed in the writing and most of all to meet Gideon and get to know him . Have tissues on hand and be prepared to shed some tears . These books will make you think, laugh and cry . So if you want a great summer read check out GIDEON'S CREDO .