GOOD TUESDAY ALL ITS COMIC DAY 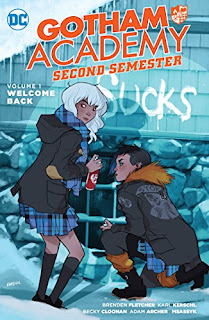 It’s the second semester at Gotham Academy, and everything is back to normal. Of course, “normal” for Gotham’s top prep school would be considered uncontrollable weirdness anywhere else!

First, a bunch of students start walking out of their extracurricular activities with no explanation and signing up for a strange new society—Witch Club! Then, a stolen map of the Academy puts the students on the trail of ancient symbols and hidden chambers.

There’s plenty for the Detective Club to investigate—but Olive Silverlock is distracted by her new rebel roommate, Amy. Is Maps Mizoguchi right to be suspicious of a bad influence, or just jealous that she’s losing her best friend?

Plus, Detective Club is joined by the World’s Greatest Detective—Batman!

This was the first book in the series that I have read .  I thought that diving into the second book in the series was going to leave me with a bunch of questions . It didn't though  I started reading and it was just like I knew what was going on . Its going to back to high school but with a big twist . Meet the super naturals and their prep school .
These are well written stories that actually have some parts of what happens in a real high school . We have the cliques the feeling of not belonging and there is an introduction to homosexuality through out the book . Well written I must say . You start to feel for the characters and actually fall for a few of them .
The characters are well written and you can't help but fall in love with a few of them like Pom and Olive .  Then there are other characters that you will not like and there are reasons behind them . I mean you can't love all the characters all the time . You always pick and choose the characters you love .
The graphics in the novel are great , the colour alone jump out at you when you start to read . The story lines were good the action never stops and the dialogue between characters is funny . Nothing is as it seems at Gotham Academy and the writers prove that on every page . This is a great addition to the rebirth universe and ties into the other stories . So if you are wanting a good comic for you and your kids this summer check it out . You will not be disappointed .