Good Thursday afternoon all, or as some of us call it Friday eve . Today we area going to review a great true crime book by one of my favourite authors . A CLOCK WORK MURDER . The Night a Twisted Fantasy Becomes a Demented Reality by Steve Jackson 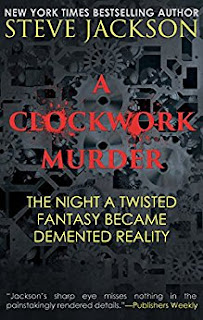 They thought about their evil fantasy for months. Then wound up like clockwork toys ... they acted.

In April 1997, pretty, 22-year-old Jacine Gielinski stopped her car at a red light in Colorado Springs, Colorado. She had no idea that the two young men looking at her from the car next to hers would in that moment decide she would be their target for unspeakable horrors.

George Woldt and Lucas Salmon were an unlikely pair of best friends, much less killers. Woldt was a fast-talking, well-dressed ladies’ man who boasted of his sexual conquests. Salmon was deeply religious, and socially misfit, obsessed with losing his virginity.

Woldt was the leader, Salmon his willing follower, but neither had been in serious trouble with the law. However, inspired by the cult movie, A Clockwork Orange, with its dystopian violence, they fantasized for months what it would be like to abduct, rape, torture and murder a woman. Then, aroused by watching ultra-violent pornography, they decided to act upon their evil thoughts.

Revised and updated with a new afterword from the author, A CLOCKWORK MURDER recounts the steps that led to an unthinkable crime and its impact on a community, as well as the friends and especially the parents of an innocent young woman who paid with her life for being in the wrong place at the wrong time.

This book absolutely blew me away, the author has such a way to write about the God awful crimes that go on in this world with a shocking realism that will have you on the edge of your seat the whole time . Lets enter into the minds of George Woldt and Lucas Salmon two polar opposites but the best of friends . George the well dressed ladies man and Lucas the shy religious guy who is just following George around . Just hanging around watching the movie CLOCK WORK ORANGE and fantasizing how they could capture and rape a unsuspecting woman . That's what is was for a long time until the day that Jacine Gielinski drove by them . That's when they put their plan into place and what happens is so unspeakable and so horrific . It was hard to read what they did to her .
This story takes us on the rollercoaster ride of emotions . It shows us the unspeakable plans that were put in place by Woldt and Salmon and all the events up to their trial .  The legal proceeding alone will want to make you scream for justice . I strongly dislike defense attorneys . I know they are only doing their job but they like to drag things out in hopes that they will just drop the case. These two men are the epitome of evil . They do and use everything in their power to stall and upset the courts. To me Worldf is the ummm whats the word oh here organ grinder and Salmon is like his dancing monkey. Salmon knows its wrong but goes along with every Woldt says and does cause he doesn't want to upset Woldt . I wanted to stab them myself a few times . They just made me so angry.
My heart broke for Jacine's parents . The hell that they went through to see her killers come to justice was just heart breaking . They were harassed and pushed to the limits but they prevailed and saw the justice that was rightfully theirs .
Steve Jackson is one of the top writers of true crime . He brings the story alive and you are sucked in as soon as you start reading . You want to know how things went down and you want the criminals to be brought to justice .  He writes with such class and grace and when he is done you want to cheer for the victims and the lawyers that prosecute them .
This book had me crying and actually swearing a little . I wanted vengeance so badly . Yes I know its a book but it is a true story , I had chills running up my spine but I couldn't put the book down . So if you like true crime and want a good summer read to finish off the summer check out A CLOCKWORK MURDER  by Steve Jackson . You will not be disappointed