Good morning all , today is a holiday here and its a great day for reading out there . Today I have book 7 in the Bryn and Sinjin series  THE CHAMPION by H.P Mallory. 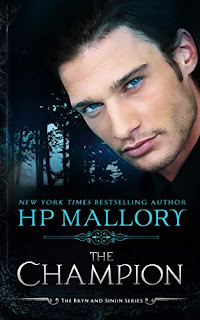 When Bryn finds out she’s pregnant, she’ll have to deal with the fact that Sinjin doesn’t believe the baby is his—how could it be? He’s a vampire, after all, and incapable of reproducing. At least that’s what everyone thought…

As if dealing with Sinjin isn’t enough, Bryn and Dureau have decided to move forward with their plan to contact Luce’s tribespeople through their dreams. Bryn and Dureau both hope to enlighten Luce’s people that they’ve been fed nothing but lies and that a better future awaits them if they agree to join Jolie’s court. But, that plan doesn’t exactly go as Bryn and Dureau hoped it would…

How will Dureau respond when he finds out Bryn’s pregnant? And what happens when Bryn and Dureau are forced to accept the help of Monsieur D? And will Sinjin ever believe he’s the father of Bryn’s child?

Find out in The Champion, the seventh book in the Bryn and Sinjin series!

MY REVIEW
When Bryn finds out she is pregnant , something she never thought would never happen. She finds out the Sinjin doesn't believe her and tries really hard to figure out if his being a vampire could sire a child. On top of that she and Dureau have decided to infiltrate Luc' s tribe through dreams. They want to plant the seed of doubt in the people and let them know that Luce has just been feeding them lies . Will they be able to convince the people and will Sinjin come to terms that he is going to be a father .
The gang is back and better then ever . Sinjin is well he is still his arrogant self and he is such a fun guy. He well he is so alpha and so protective . I truly like his ways . Bryn is well she is trying real hard to com to terms with what is happening and with her and becoming a mother . Jolie and Rand are back as well as Dureau and the rest . They are so good when they are all together .

Now you might think that by book seven the characters would start to stale and really not wanting to read . Well I am here to say that is not true with this series . The author is keeping them fresh and likeable . The story line is good and getting better with each book . I love the main characters they are so cute.  The author takes us on a fun filled roller coaster ride. Bryn and Sinjin will have you laughing out loud , or sitting on the edge of your seat and maybe making you blush just a little . I am so happy that Sinjin got his own series of books and finally found the love of his life. Now they just have to let down their guards a little to create the family they both want and need . Check out this series you will love it
Posted by BOOKS TO CURL UP WITH at 7:14 AM