Welcome to a beautiful Saturday , today I have a new author for you , I AM AMYARA ( Amyara  daughter of Eros book one) by  Hannah Earl 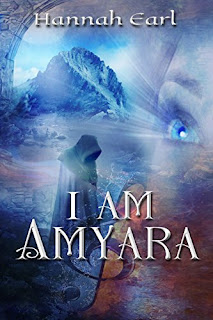 Life should be fairly simple for an average, teen girl meandering her way through high school…you would think.
Sophia Papas’ only concern is finding the right color dress for Prom until a life-threatening car accident twists the hands of fate…literally! Everything she thinks to be true is turning out to be one big, Greek lie.
Her father isn’t dead, he just went home…to Mount Olympus! That isn’t just some weird, random guy stalking her hospital room…it’s a freakin’ Demon! That isn’t one of the Fates shooting green magic out of her hands…OK - that IS one of the Fates shooting green magic out of her hands. And the topping on the Baklava is Sophia’s new found powers seem to introduce themselves at the most inopportune moments.
How did this happen? What does that make Sophia? Can she live a normal life? CAN SHE HAVE A REGULAR BOYFRIEND? bu
Questions are piling up and danger is getting closer. Only time will tell what the future has in store.

MY REVIEW
Sophie Papas really thinks that here high school life would be easy until the day her and her sister get into a horrible car accident. Things start to change and boy do they change . She finds out that everything she has been told is one great big lie and her father is alive and living on Mount Olympus . Yes he is a God and then there is a guy stalking her hospital room and well he is a demon.  Then there is the boyfriend that well she thought was normal but alas will anything be normal again .

There are a so many characters in this book that are in this book . The main character Sophie is sometimes naive as you start this book . She just is kind of just there but as the story goes on she really is a fun read . She starts to come into her powers and man its so funny to read .  Conner is so sweet to read he is so protective of Sophie and he is so cute when he does it . I just really love these two together .  We have her best friend who is the comic relief betwen them all . She is so fun and pushy in her own way . LIke i said there are so many characters to mention but they are so much fun to read .

I will say this is a pretty good read  it took me a few chapters to actually get into the story and figure out what was happening . The characters are well written but i just didn't feel a connection to them until they were out of the hospital and interacting together . Thats when i got into the story more . I really like the mix between Greek mythology and some other paranormal entities . There were some spelling mistakes and places where it lagged , which would rectify itself with another edit . Over all i truly enjoyed this story and would like to read more about these characters in her other books . This would be a really good for your teen ager on spring break . Check it out .
Posted by BOOKS TO CURL UP WITH at 1:16 PM