Good Wednesday everyone , today I have a new author for you . Kathryn C. Kelly and her taboo book INFERNO (Phoenix Rising rock band book one ) 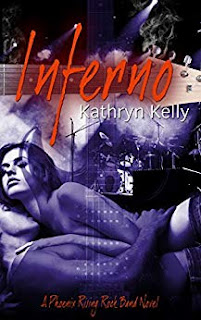 I’m a rocker with the eyes of the world on me. Waiting for my triumph or my downfall…just waiting.
Most of my life is in my hands. My destiny? That’s another story. My destiny isn’t as debt free.
My band, Phoenix Rising, arrives in Houston to cut a new album. Before we perform our first concert in the city and I choose my groupies of the night, I’m thrust into debauchery. Sleeping with a gorgeous woman twenty years older than me has its perks, especially when her husband orchestrated the encounter and eagerly watches. To me, performing is performing. If a man wants to share his wife, who am I to stop him?
Unfortunately for me, I don’t make a clean getaway as I leave the McCall mansion. Georgie, their sixteen-year-old daughter, is in the midst of her own intrigue, sneaking home in the middle of the night after an evening of drugs and sex with her older brother’s best friend. In her, I see me. She’s lost and drifting. Her hedonistic parents insist she’s old enough to make her own decisions. Instead of time and love, they give her money and things.
I’m a twenty-five-year old international superstar and I know better. I’m cocky and arrogant. I know it so I own it. Somehow, I’ve always bested the fates. I have all to lose—my reputation, my career, and my freedom. Her mother’s jealousy forces my hand and I take Georgie on the tour.
This is our story and our secret relationship and the destruction of my life. You know the adage about secrets? Three may keep a secret, if two of them are dead. Wise words from a wise man. If only I had listened. Secrets have a way of revealing themselves in the harshest way.

MY REVIEW
When Sloane and his band show up in Houston to cut an album and he gets more then he bargains for . Yes he is arrogant and picks his groupies every night . Then it happens when he is asked to have sex with an older woman as her husband watches . Well he can't get away from the family that easily when their sixteen year old daughter Georgie gets her claws into him . He can't get away and she won't let go . Will they come out with their hearts and will they be able to really let go .

Ok the characters are ok . I really found that they were kind of annoying . Sloane and his arrogance really drove me crazy. I really wanted to knock him up side the head a few times
Georgie is well she has the rich party girl persona down pat . She drinks too much and is addicted to cocaine . I wish she would of been a little less hooker and a little more teen ager.  Georgies mom is the typical older woman who can't face aging and needs to be told she is beautiful all the time . They just have so many problems and sometimes that just makes them not likable .

I love a taboo book but this one is a whole lot of confusing . The author had her characters talking in their heads most of the time so it got confusing . Now don't get me wrong the story is interesting but there is so much going on that sometimes you really get confused . I did like the premise of the sex drugs and rock and roll aspect and the younger groupie and older rock star but i feel it just got mucked up .  Over all i did enjoy aspects of this book and might try book two to find out what happens . So if you want a book that will have you thinking this might be the book for you, and if you don't mind sex drugs and rock . Check it out
Posted by BOOKS TO CURL UP WITH at 7:13 AM