Good morning all its Friday eve and I have the first two books in the Blood Prophecy for you today .
QUEEN'S DESTINY  and QUEEN'S ENEMY  by Barb Jones 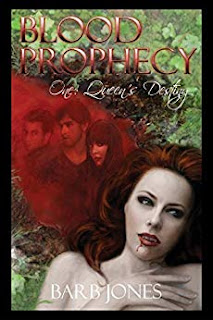 Amber Stone, once a child prodigy, has just become curator of a special collection of Macedonian artifacts for the Seattle Museum of Natural History. Chloe, a prodigy of a different sort, holds a position at the museum focusing on tribal art. The two become fast friends, united by Amber's unsettling dreams and Chloe's unorthodox ways of dealing with them. Two strangers arrive in town, bringing with them a prophecy recorded more than three-thousand years ago, a prophecy that places Amber directly in the midst of a battle that has spanned a millennia.

MY REVIEW
Amber Stone has just become the curator of a collection of Macedonian artifacts , for the Seattle Museum of Natural History becomes friends with Chloe a curator of tribal art. When two strangers come to town and tell them aboup a three thousand year old prophecy that throw Amber right in the middle of a battle that has spanned millennia.

This story has quite a few characters involved . Amber is the main character and she is feisty but sometimes a little naive . There is more to her then meets the eye . She is also a vampire if she turns and a queen . So there is a lot on her plate and she is trying to deal with it all . Chloe is her best friend and a witch who is like all best friends trying to help Amber pick up the pieces and fit everything together . There are so many characters including witches , werewolves vampires and so many more .

This is a story where you have to concentrate on what is going on . you really have to work on figuring out what is happening . We do jump from past to present in this book and you kind of get lost on the way. But oh boy when you get sucked in you get sucked in good . The story has everything witches , werewolves and vampires all together thrown into a prophecy. Overall i loved the story and the characters I just felt that it was a bit confusing at times ,  Like I said that you have to work for it but man it is worth the journey in the end . So if you want a story that is interesting and will have you on the edge of your seat check it out 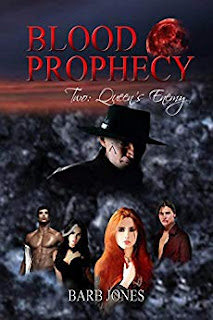 When you are in love with the one you fear and hate the most, it leaves you no options. How can you fight her, protect her, love her, when all it would do is leave you in pieces?

Amber and Chloe are pulled deeper into the Prophecy that reveals itself as the Blood Moon rises. Michael is pulled and torn into different directions. His choice is fated but is not known until Amber embraces her true destiny and is crowned Queen.

Together, all four embark on a journey, joined by new allies, enemies and the past. A child is born to be the instrument of the Queen.

This is the preparation for the upcoming Epic battle that has spanned a millennia.

MY REVIEW
Chloe and Amber are getting pulled in deeper and deeper into the prophecy . Michael is getting pulled  into two different directions . With his choice fated and is unknown until Amber is crowned queen . A child will be born to be the hand of the Queen and the epic battle is being prepared for . Will they all be able to come out and survive .

In this book we find out more about the prophecy and what parts everyone will play . I love Chloe and her baby and their quirkiness. They are such fun characters reading . Amber well she is feisty and is still coming to terms with what is going on . Michael i really feel for him he is being pulled in so many directions and really doesn't know how or what to do. There are more and more characters added to the group .

This book has some time jumping and back stories which I honestly got confused a few times. We find out more about the prophecy on the blood moon . Amber and Chloe are falling deeper down the rabbit hole so to speak . With each of them trying to figure out what they are going to do . Michael poor Michael is really going through it in this book all you want to do is hug him . The story is good and the characters are great but there are areas in the book that are just confusing and dragging . There are a few issues where a good run through one more time with an editor would clear up . Overall I truley enjoyed the story and the characters . So if you want a story that will have you on the edge of your seat check it out
Posted by BOOKS TO CURL UP WITH at 7:48 AM