Good afternoon all , well I got over my bloodwork this morning . Today I have a Scottish highlander book for you from a new author for me . A SCOTS PLEDGE by Sky Purington . 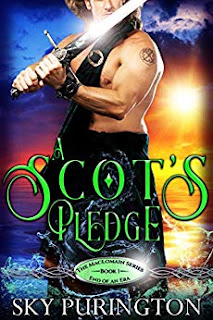 From friends to lovers, forbidden passion sparks between a modern day woman and a medieval Highland warrior.

Accustomed to watching over things for Clan MacLomain and their Viking ancestors, Julie had given up hope of traveling back in time for love like those before her. Until the day an old friend turned crush shows up on her doorstep in New Hampshire claiming he needs help in fourteenth century Scotland.

Having pledged to help his clan, Laird Tiernan MacLomain searches for his destined Broun in the twenty-first century. Yet he only wants the woman he's secretly loved for years. So he breaks the rules and brings Julie back to the medieval period with him. She might lack the bloodline needed to harness the power of the Claddagh, but he won't leave her behind.

Together, they embark on a whirlwind quest to protect King David II against Edward Balliol and his disenfranchised nobles, the 'disinherited.' They also face a dark threat nobody foresaw. Will Tiernan and Julie defeat it without the power of predestined love? Or will breaking the rules be their ultimate downfall and Scotland's ruin? Find out in A Scot's Pledge, an emotional and passionate journey into the turbulent onset of the Second War of Scottish Independence.


MY REVIEW
Julia has been helping out the Clan Maclomain  through time and space find the women that they are destined to be with back in their time . When the man of her dreams comes to her and asks her to come back with him to help him save and protect young King David the II from Edward Bailioi. But will they survive and save the young king or will breaking the rules of predestined mates destroy all that they are trying to save .

Oh my goodness there are so many cool characters in this book . We have highlanders and man who doesn't love a man in a kilt. We have a dragon guard and throw in some witches and druids and you have on heck of a story . The two main characters in this book are Julia and Tiernan . Julia is one feisty woman , she is in love with Tiernan but could never act on it because she thought she wasn't destined to be his . But like you all know that with any good story rules are meant to be broken and broken they did .hehehehehehhe . Tiernan well he is a highlander with the Viking lineage behind him . He is kind of gruff but he is really sexy to.Trust me on this one ladies . You will fall in love with this bloke .  He is part perfect gentleman and part sexy highlander with a brute force that will take your breath away .

This is the first book I have read from this author and I must say I got sucked in to the lore and the fantasy of the book . Everything from the meaning of the Claddagh ring to the Scottish thistle . Oh and don't forget the sexy highlanders .  The author did a very good job combining all the Scottish heritage and the folk lore in her story . I did feel though that it kind of dragged just a little at times but over all it was a great book to read . I read it in an evening and honestly couldn't put it down . It honestly kind of gave me an outlander vibe with going through the stones and women finding the men they love back in the medieval tunes , which I love stories like that . So if you want a story full of love and destiny check out this book . I am on book two now and loving it .
Posted by BOOKS TO CURL UP WITH at 1:08 PM