Happy Thursday all , today I am going to review a book that I have been waiting to read for awhile now. Its the fourth book in the Savannah witches series . But it is actually a prequel in a way to the whole story. JILO by J.D Horn 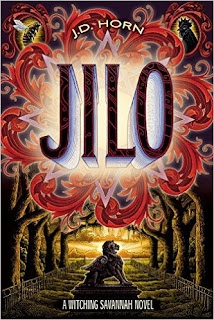 Aged Mother Jilo is wise in the ways of magic…but once upon a time, she was just a girl.
1950s Georgia: King Cotton has fallen. Savannah is known as the “beautiful woman with a dirty face,” its stately elegance faded by neglect, its soul withering from racial injustice and political corruption.
Young Jilo—fiercely independent, intelligent, and ambitious, but thwarted by Savannah’s maddeningly genteel version of bigotry—finds herself forced to embrace a dark power that has pursued her family for generations, an ancient magic that may prove her salvation…or her undoing.
Explore the fascinating history of one of the Witching Savannah series’ most vivid and beloved characters, as the resourceful and determined Jilo comes of age, strives to master formidable magical skills in the face of overwhelming adversity, and forges her strange destiny against the turbulent backdrop of the civil rights struggle in the American South.

MY REVIEW
I was so excited to find that J.D Horn was writing this book. Jilo was  my favorite character in all the other books, she was the epitome of what magic was and how it helped and hurt people.  Well we start at the beginning in 1950s Georgia where we meet a young Jilo, just in diapers , dropped off at her grandma's house with her two older sisters . We watch her grow up in the first part of the book . Trying to figure out the power that is hidden inside of her. Mother Mary her grandma does everything in her power to keep the magic away from Jilo. There is so much going from the prejudice of the times and the feeling of loss of the family and friends . The second part of the book has us following Jilo as a young woman , trying to make it in the world still full of prejudice . You find her struggling and trying to be good . Home does call her and she must come to terms with what all that means as the magic finally finds her and turns her into the aged old wise woman that we all know and love ,
The characters in this book are familiar yet we find out so much more about Jilo and her family . Jilo is such a complex character that shows us there is more to a person then what is on the outside . She was a strong character from the very beginning, even in diapers . We see her wielding the power. As she grows , she becomes a very hard headed stubborn woman that will do almost anything to survive , even take a nursing position when she really wanted to be a doctor. I loved Jilo cause she had such an aura of strength around her . She fought for everything and got it by sheer determination. Trust me you will like her . The other characters just add to Jilo and her strength , they all teach her things and help her along the way.
The author weaves a tale that will keep you reading well into the night . He finally lets us get to know Jilo. She has been such a mystery in the other books . He shows us the hatred and the turbulence of the times as he weaves his tale . He masterfully told the story in two parts , as I like to call them the early years and the and the years of Jilo . The trip we go on is rough and some times sad.  You will laugh and yes you will shed a tear or two . The author has taken Jilo and made her human and not such a mystery . So if you want a great book to read check it out . I promise you will fall for Jilo and the rest of the Savannah witches
Posted by BOOKS TO CURL UP WITH at 8:27 AM