Welcome to the Monday after Easter , I hope that you all have recovered from your food comas and looking for a great fast read to get you through the evening. . A BITE OF FROST by Gena D Lutz is just that book. 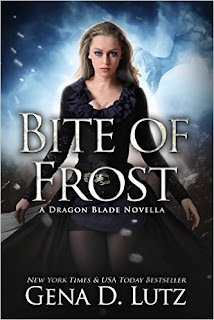 After Jericha Frost is thrust into a paranormal existence she knows nothing about, she learns that the scorching blood from an infuriating dragon-shifter is her only hope of survival.

MY REVIEW
This a winter/ Christmas novella that revolves around Jack Frost and his daughter and the hot dragon guardian named Conner.  We start the story as we find that Jack frost's time as the ice king is coming to an end and he must transfer his power of the winter to his daughter . Jericha Frost is in for a surprise when she gets whacked in the back with the bolt that Jack sends her . Now she has to contend with all these supernatural powers and also  hot blooded dragon shifter who is her mate . Will she come to her senses and realize that the dragon is her only one an only and that he can save her before its too late .
The characters in this novella are different . We have Jericha who is a mixture of quirky and seriousness.  She is independent and really doesn't want to have anything to do with  Connor. She is taking her new powers in stride but soon realizes that she needs and wants more . Connor is one hot as sin alpha dragon . You don't know if you want to yell at him for his over bearing ways or climb him like a spider monkey cause he is just so damn hot .  He is a blue dragon and a guardian of an ancient blade. He is the epitome of hot male and realizes that he just can't take . You see him change to a more caring man towards the end of the book . I can't say anymore cause I am so not giving spoilers . But you might want to take a second look at Santa too cause boy oh boy he isn't your kids Santa Claus .
This is a fast read , you can read it in one night . I really loved the premise of the story and the characters are awesome . I laughed and snorted at the antics of the three elves . They were hilarious .  I just wished that it was just a little bit longer , I wanted more of Connor an Jericha . really wanted to see them go at it.  Over all I  really enjoyed this novella and laughed and cheered as I read. So if you want a nice fun quick read check it out .
Posted by BOOKS TO CURL UP WITH at 1:44 PM