I was so excited the other day going through amazon and found a book I actually haven't read by one of my favorite authors . I so jumped at the chance to read and boy I was so glad I did . Reckless ( Shattered Sisters book 1) by Maggie Shayne. 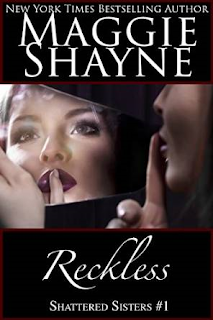 True Crime Writer Toni Rio follows a wise guy straight from his brief stint behind bars to his execution in a dirty alley. When his two killers see her witnessing their gruesome work, she runs, but she doesn’t get far.

FBI agent Nick Manelli has to keep his cover intact and keep the sexy witness alive, and there’s only one way he can think of to do both. He has to kidnap her.

MY REVIEW
What do you get when you put a undercover FBI agent and a crime novelist together in a situation that they shouldn't be in . You get Reckless a sexy action packed read full of suspense, drama and there is always time for some romance. Let me introduce you all to Nick Manelli and Toni Rio. The couple at the center of the story. Toni follows the witness from a crime family into the back alley to see him get murdered. Now it up to Nick to keep her safe and keep his cover intact with the mob. Will they survive each other and will they find out the truth about each other before its too late .
I loved this book , they say this was one of her first books but if its an old story . I must say that is a great story that she revamped. The story was engrossing and I was totally into the story from page one . The characters were complex but totally likeable and you wanted them to get together from the very first pages .  The action was fast paced and really kept you on the edge of your seat the entire time you were reading . Between the mob story and the kidnapping of Toni the pages just turned themselves . Every story needs romance too and Maggie throws that in there too , she lets it flow naturally to the story line and doesn't force it at all . You were cheering when they finally got together and finally ended up together .
The characters of Nick and Toni were complicated but also very likeable. Toni is a no nonsense girl who would kick your ass if you did something to hurt her or her family . But she is also hiding something. She is my type of girl, you don't know if you want to friend her or run from her . She is that strong of a character . She doesn't need anyone to take care of her so she thinks until she runs into Nick literally. He is the sexy FBI agent that is uncover in the mob . He is a true alpha male, hot sexy and dangerous all rolled up into one man . He is hiding a whole mess of things that he works through as we read through the book . You can see that they both have trust issues that they work through. The sassiness of Toni and the gruffness of Nick  work as a couple . When the heat is on and push comes to shove they are truly there for each other and will do almost anything to keep the other alive . Even almost get killed themselves . Carl is the best friend and fellow FBI agent that helps Nick out. He is a sweet guy that you want to protect and keep out of trouble . And boy he gets into some trouble .  Lou and Viper are the quintessential mob guys , Viper was a greasy no good that I really just wanted to punch in the head and Lou reminded me of a creepy used car salesman .
I was so engrossed in this book , I loved every second. The book had such a good story and flowed so well . If  Maggie Shayne wasn't already one of my favorite authors she would be after this book. I read this book in one night and I had a book hangover after wards . In my opinion that is a sign of a great book. It kept me curled up on the couch reading well into the night. Maggie Shayne can weave a great tale full of suspense and drama and then throws romance in there as icing on the cake . So if you want a great read that might give you a book hangover . Check it out , you will not be disappointed