WHAT WOULD YOU DO

Good morning every one hope you all survived ST PATRICK'S DAY  yesterday. I was reading all day long . I couldn't put this book down. EMANCIPATION  by Jo Michaels is one of those books where you think to yourself what would you do. 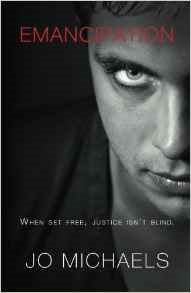 Tobias Butler has been sitting on death row since being sentenced for a gruesome murder in 2007. Bored out of his mind, he decided to apply to the online pen pal program in 2012. It's a pleasant distraction--nothing more, nothing less--for three years, until he's contacted by a beautiful, smart young lawyer named Jess. She's convinced he's innocent and wants to see him freed. As they organize their attack on the judicial system, he wonders how she plans to get his conviction overturned--because he's guilty, and he knows it. Jess is desperate to release him--and he's desperate to feel his hands squeeze the life out of her once she does.

*Bonus Read Inside! Get the entire first part of Dark Bishop, Pawn, by Casey Bond and Rachael Brownell!

Recommended for 18+ only for strong language and sexual situations.

MY REVIEW
Wow is the first word that comes to mind when I read this book. It started out as a criminal and lawyer book with the young lawyer finding some new evidence and the death row inmate that wanted out . This is the story of Tobias and Jesse .  Tobias is on death row for murdering a family , and he is bored and wants out . Enter Jesse a young lawyer who wants to help him out . They meet via the pen pal program . They work tirelessly to get him out , but oh there is so much more to this story then him getting out of jail . Will they both survive the ordeal .
I couldn't believe how complex these characters were . Tobias is not your run of the mill inmate . He is a conniving sob that just wants to left alone. He is such a asshole, you really want to just string him up by his fingernails . I was actually really creeped out by Tobias .  He gave me the wiles from the very beginning of the story. What he did to end up there , I was actually cheering that he was behind bars . Then in walks Jess a young lawyer and a woman. She seems to be very naïve at the beginning of the book, she seems to buy into all the lines and lies that Tobias is telling her . As we read more into the story you see there is something stronger and she is hiding a few secrets of her own. They are great characters with such great flaws.

I couldn't put this book down , I was on the edge of my seat all the way through .  The author takes us on an emotional journey.  The story is not your everyday happily ever after book. It has so many twists and turns. When you think you know which way the book is going bam the author takes us in a totally opposite direction. There never is a dull moment in the book between trying to figure out Jess is up to and  wanting to strangle Tobias. Which for me was every other page it seemed . But the twist the author put in at the end blew me away . I never saw that coming at all and was floored but happy when I read it .  I was so blown away by what the author did at the end that I actually cheered for her .  I will tell you this , this isn't you happily ever after , there is lust blood shed and redemption and revenge . You will get a book hang over reading this book so be prepared to curl up and read the day away .
Posted by BOOKS TO CURL UP WITH at 9:49 AM