Good Wednesday all today is new release day for N.L Hoffmann and her spin off book LUCIFER . 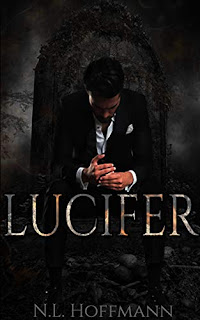 *Spin-off from The Daughters of Darkness series.*

Lucifer wishes his brother, Aden…whose name you can't say in vain…would stop trying to change him. He wants to do something about it, to prove himself, but what can the devil possibly do to make the world a better place? After being told he must perform at least one good deed every five hundred years, Lucifer pairs up with a young artist to find the Book of Souls and return it to Hell.

Because of her ability to touch someone and see into their soul, Maye decides to keep herself hidden from the world. Being an introvert is acceptable for an artist, right? But when she buys an easel and a plain, wooden box, her whole life changes.

The devil is the embodiment of evil, but when he meets Maye, the past hits him in ways that should not be possible. Over the centuries, he’s built an impenetrable wall around his heart, but piece by piece, it’s started to crumble, allowing old emotions to seep through.

As Lucifer and Maye work to find the book, they begin to question their own strengths. Question whether they can defend the world. All the while, they must battle their feelings for each other, hoping to avoid the idea that fate might just have different plans for them.

Can they succeed and save humanity? Or will destiny intervene and force two opposites together, unwittingly releasing chaos into the world?

MY REVIEW
What Lucifer wants is to have his brother Aden would stop trying to change him . He is the devil for crimneys sake he wants to prove that he can do something to make the world a better place but what . Until the moment he is paired up with a beautiful young artist to save the world .  The Book of the Dead is stolen and they have to get it back to hell before it destroys the world . They realize there is more to them then meets the eye . They start to second guess their strengths and weakness. Will they be able to save the world and keep their hearts intact as well .

Ok lets talk Lucifer the main character in this story , I love the way he is written . It is refreshing to see him as a fun loving kind of character . Yes he is still arrogant and self absorbed but he is also funny . He runs around in bedazzled speedo. He is sexy as sin and yes you would like to climb him like a spider monkey but there is a side to him that will have you wanting to hug him and hold him tight . The author also shows his softer side and I truly like that side of him .  Maye well she is feisty and sweet, she doesn't let anyone or anything stand in her way . There is so much more to her then meets the eye . She is special and you will love her . Aden well he is God and man he is funny , watching him try and keep everyone in line . He does have some good one liners .  Oh just wait there is more  Anubis and Anput . They seem to be running amuck . Anput is well she is a b with and itch and wants to wreak havoc on the world . Anubis is well he is trying to stop her and also keep his daughter safe .

Ok I will admit i kind of squealed when i found out the author has written a spin off to the Daughter of Darkness series . So I grabbed it and sat down and started reading . I couldn't put it down or get the image of Lucifer in speedos out of my mind .  The characters are so well written and so funny . Trust me you will snort and laugh out loud .  The story is sweet and sexy . You will love it so if you want a funny book for the summer reading by the pool this is the one for you .
Posted by BOOKS TO CURL UP WITH at 8:42 AM