Woohooo made it to Friday , the weekend is upon us , today I have a updated book from Linda Thomas - Sundstrom . GOLDEN VAMPIRE (blood knight book 1) 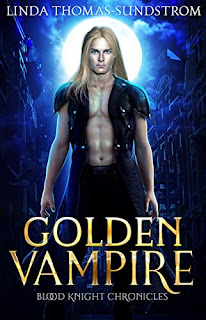 The Dark Surrender... is the ultimate embrace of everlasting love that can exist between immortals.

Former cop Jesse Stewart, hired by a foreign government to find a senator's missing daughter, finds much more instead -- a centuries old immortal, and a haunting piece of her past.

Once a famous knight, Lance Van Baaren still adheres to an original quest, and has sworn to protect the innocent. But can he allow Jessie solve her case when it means discovering the truth of her past, and what connects them?

MY REVIEW
When Jesse sees this man running in the field , there is a pull towards him that she can't deny . When she is hired to find a senators daughter , she finds more then she bargained for. She finds a piece of herself and her past but will they survive the mission and will they be able to connect with each other and the past that connects them .

I must say I truly like these characters , they are well written and complex .  Jesse is a tough as nails ex cop . She doesn't let anyone push her around she likes to take charge . There is a soft side to her that she wrestles with through out the book . Lance brings that out of her . She is a great herione . No nonsense and straight forward and kind of sassy .
Lance well besides being immortal , he is sexy and all alpha . There is more to him, he is a knight that is on a quest that will keep him going .  Ladies you will like him , you will want to hug him or climb him like a spider monkey . They are great characters on their own but when they come together they are explosive .
Stan ,Jesses' helicopter pilot will keep you in stitches , he is a great side kick for Jesse. They play off of each other and you will giggle at some of his antics

This book had me hooked by the second chapter . There is a real gothic feel to this book and there is some dark intense stuff going on . The characters are awesomely well written and complex . You will love them . There are twists and turns that will have you on the edge of your seat most of the time . There is also some romantic sexy times that could over heat your kindle just a little . I love reading this author , she writes intelligent romance novels . She will take you on an adventure ride that will leave you breathless and wanting more . So if you want a book that will take you away and let you fall in love with the characters . Check out this book , I would say this is a great read for beside the pool or at the beach . So add it to your summer reading list .
Posted by BOOKS TO CURL UP WITH at 7:29 AM