Well made it to hump day and the week is flying by. Today I have a new author to me  LaVerne Thompson, THE BEAST WITHIN . 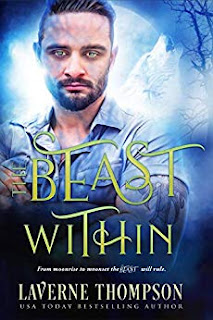 From moonrise to moonset, the beast will rule.

Caleb’s family had a secret. One they’d held for over 300 years. One he’d reveal to save one woman’s life. Because she was the other half of his soul, even though it was her kind who condemned him to be the beast he was.

Lissette knew her family had secrets. What family in New Orleans as old as hers didn’t have family legends, most she disregarded as nonsense. Until she came across something leaving her no choice but to believe. Especially, when it meant her life… or his.
Because of the subject matter and content must be 18+

MY REVIEW
After being cursed for over 300 years , Caleb and his family have been keeping the secret . Until the day he sees Lissette at the bar he owns . He feels this pull to her because she is the other part of his soul . What they don't know is that she can be the salvation for him or the death of them .

The characters in this story are well written , Lissette is a strong woman who doesn't take anything from anyone . She also comes from a long line of women that have an insight . She can kick butt and will do anything to protect the ones she loves .  Caleb is an alpha , oh so sexy and he knows what he wants and will go and get it . He is also caring and will do anything for those he cares about . I liked these characters as individuals but as a couple they were hot . For every good guy we also have the bad guy . Terrell well he was just a complete idiot and stalker . He was oh so creepy. Now Camille well she is just clueless and kind of the comic relief in the story . I picture her as a blonde for some reason . Then like all good romance stories we have the family that likes to interfere and boy do they ever .

I went into this story not knowing what was going to happen . This book took me by surprise  I really got into it . The characters are well written and you start to love them . The author takes us on an adventure through New Orleans and the bayou . There is action , intrigue and oh so much romance . This is a book you can get lost in for an afternoon . So if you want a good read for you summer beach read check it out .
Posted by BOOKS TO CURL UP WITH at 8:22 AM