WOOHOO IT IT THURSDAY

Welcome to Thursday all , hope your week is going good . Today I have another new author to me . Melanie Florence and her book  THE MISSING 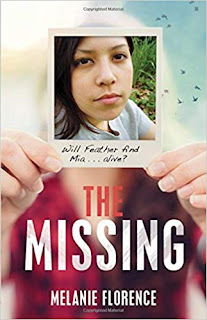 After a girl she knows from school goes missing and is found dead in the Red River, Feather is shocked when the police write it off as a suicide. Then, it's Feather's best friend, Mia, who vanishes — but Mia's mom and abusive stepfather paint Mia as a frequent runaway, so the authorities won't investigate her disappearance either. Everyone knows that Native girls are disappearing and being killed, but no one is connecting the dots.


When Feather's brother Kiowa is arrested under suspicion of Mia's abduction, Feather knows she has to clear his name. What Feather doesn't know is that the young serial killer who has taken Mia has become obsessed with Feather, and her investigation is leading her into terrible danger.


Using as its background the ongoing circumstance of unsolved cases of missing and murdered Aboriginal women, this fictional thriller set in Winnipeg explores one teenager's response to a system that has long denied and misrepresented the problem.

MY REVIEW
Welcome to Winnipeg where Feather is going to high school, young girls are going missing and when Feather's friend Mia goes missing , Mia is painted a frequent runaway and the police aren't going to investigate  When Feather's brother is arrested for Mia's abduction . She is going to do everything to prove that he didn't do anything . With the serial killer closing in Feather is putting her life in danger . Will she find out who the killer is and will anyone actually listen to her .

The characters in this book are very well written and complex . Feather is your typical teenager and she is also native. She is feisty and doesn't want another young girl murdered .  I truly liked her , she gets into your heart and you really start to care for her . You want to keep her safe and wrapped up in a warm blanket .  Kiowa , Feather's brother, well i feel that he can be a hot head when he is pushed . He has something to hide i felt as i was reading him . There are so many good and bad characters in this book that you will love and hate at the same time .

I was intrigued when i found out that this was a Canadian author and she was writing about the indigenous community in a Canadian province . There are quite a lot of serious issues tackled in the book everything from child abuse , the disappearance of young indigenous women to victim shaming . They are some of todays hottest topics . You won't believe what actually is going on with the police and others that are in the middle of it all . This is a book that will have you thinking and wanting to do something . The author will keep you on the edge of your seat as you read .  This book will have you talking about what you can do . I would let my teenager read this book and you should read it this summer . You will not be disappointed
Posted by BOOKS TO CURL UP WITH at 8:13 AM