Well its is Sunday and the weekend is almost over . I hope your weekend is going great . Today I have a new author  Kinney Scott and her new book ADDICTED TO TROUBLE (In Ashwood book 4) 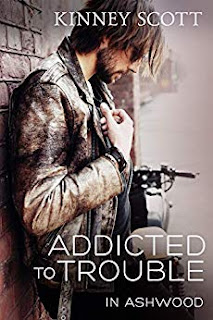 Passion and politics feed more than one vice in Addicted to Trouble.
Iris loves Northside Grill as much as an old friend, but if her customers keep leaving for the competition, she may be forced to sell. Her best option? To run for a vacant seat on the City Council and use the position to instigate change.
Her hot-as-hell rival has the same idea. And the owner of Lincoln’s Pizza might stoop to bribe voters with his addictive crust and delicious secret sauce to win the election.
Lincoln craves competition. When Iris challenges him in the local political race, he’s intrigued.
A woman as fine as Iris shouldn’t trust a man like him, but Lincoln can’t resist twisting his interest into a provocative game. Will his high-stakes gamble pay off? Maybe time and a few rides on his Harley will tip the odds in his favor, because Lincoln definitely isn’t a sure bet.

Welcome to Ashwood , where Iris runs Northside Grill and loves it so much . When her customers start heading to the competition. She has to come with a plan to keep her bar or she will have to sell .When a seat on city council comes up vacant  she decides to run but so does her rival . The hot as hell Lincoln and the owner of the rival pizza place has the same idea. When Iris intrigues him he can't help but go after her and make her his . But will the bet pay off and will they come out together on the other side.

The characters in this story are well written and complex . Iris is a loyal woman who loves her town and loves her bar . She has had some past problems that have shaped her into the woman she is. She is loyal and kind and wants to see her town survive . There is a part of her that is because of what she has gone through . Has a hard time trusting and comes of a little naive sometimes .  She has lots of friends that are there to help her when her past comes back to haunt her.  Lincoln well lets just say he is hot and sexy . He has a son and well smokes one cigarette a day . He is cocky and so sure of himself  and loves the challenge, You actually see him start to change the more time he is with Iris . Actually you see them both change . They really do make a great couple and i truly liked them together , they challenge each other .

This book is the first book I have read by this author and I was pleasantly surprised . I was sucked in by the second chapter and I started to really care for them . There are some twists and turns that will keep you turning the pages . There were laughs and tears , trust me there are a couple of scenes where I had tears running down my cheeks . There were a few spots in the book that I felt that should of been a little shorter and it kind of fell into the trap of girl gets boy and then something horrific happens and girl runs off and boy finally gets a clue and runs after her . I just think that it is a trope that seems to be way over done  It didn't stop me from reading though the author does a good spin on it though . I would recommend this book for your summer reading list . Make it one of your end of summer reads for the pool
Posted by BOOKS TO CURL UP WITH at 12:14 PM