Good Tuesday everyone. I am so excited I finally get to do this review for Dakota Cassidy's series
FANGS OF ANARCHY . So here I go this is going to rock

Irish McConnell would give his immortality for a taste of Claire Montgomery. But the Fangs of Anarchy leader can’t risk his biker club, his vampire clan, or his tenuous truce with werewolf Gannon Dodd, Claire’s pack alpha—and her intended mate. Nope. Vamps and weres don’t mix, and Irish has managed to keep that in mind for five long, lust-filled years.

But now Claire’s gone and done something really, really (really!) bad, guaranteeing her doom if she’s ever found out. Truce be damned, Irish won’t leave her unprotected, despite the fact this is one murder-filled bundle of trouble he doesn’t need.

And unfortunately for Irish, the trouble’s just beginning…
MY REVIEW 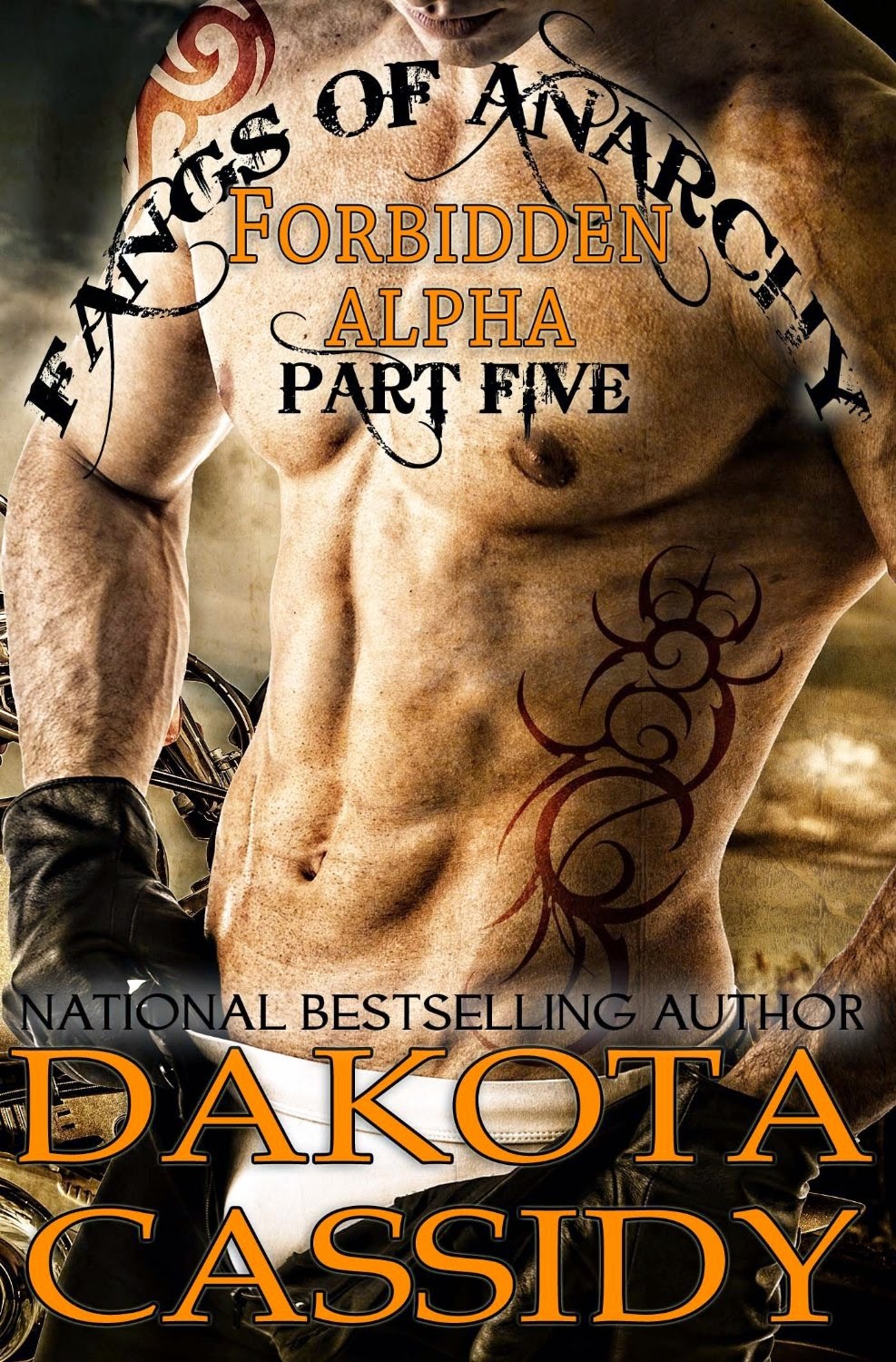 First off let me tell you this BEST COVER EVER.

Let me introduce you to Irish McConnell the leader of the Fangs a hot vampire biker club. and Claire Montgomery , the shy librarian, who is a werewolf and the intended mate to Gannon Dodd, the leader of the weres biker club. Irish has been harboring strong feelings for Claire but he can't act upon them because of the rules . Weres and Vampires do not mix for any reason , Until the day he walks into the dingy bar and finds Claire and the mess she made. Not knowing what happened Irish decides to help poor Claire. wanting to find the reason why Claire did what she did.

Now they have one hot night of forbidden passion. Knowing that they will never be able to do it again. Now the Weres are moving in and they know something is up , will Irish and Claire be found out and will they find their way to each other.

All I can say is this, this book needs to be on every woman's naughty reading list. It is hot hot hot. The story unfolds when all the super naturals are pushed into certain areas. Taken from their homes and jobs . They are forced to figure out how to survive hence the biker clubs.

The characters are so sexy and complex . Irish is one character that you can picture yourself , hopping behind him and driving off into the sunset on the back of his Harley. He is the vision of the alpha man. Gruff but with a heart of gold for the one woman that he wants . Claire is a force to be reckoned with also. She may be small and a librarian , but she knows what she wants and it isn't Gannon Dodd. She will do just about anything not to mate .

Dakota Cassidy takes us on a very naughty night of passion. You will be turning the pages well into the night. I know I was , trust me once you are done there will be great rewards and your hubby will thank you. heheheheheheheehehehehe

So if you want a very naughty book to add to your naughty pile . You all know you have one. I suggest that you make room for this naughty but fun read. A great afternoon read for anyone Read more ›

BOOK TWO : GIRL MOST LYCHAN
B

If Irish McConnell wasn’t so hot for Claire Montgomery, he’d muzzle her pretty werewolf mouth and tie her to his bed forever. No one would blame him. It’s the only way to keep her out of trouble…

Claire’s done a bad thing, the consequences of which point to more badness in her immediate future. And possibly Irish’s future…and the future of both his vampire clan and her wolf pack. But Claire’s determined to fix everything. All she has to do is find proof to justify her actions, avoid the drunken threats of her pack alpha, and stave off a race war between the vamps and weres. Easy-peasy.

The hard part? Staying away from her favorite forbidden vampire. Especially hard when he’s saving her hide every five seconds
MY REVIEW
In book two we see Irish and Claire. Fighting Conner and the boys of the wolf pack . There is a show down in Claire's house where they are accused of killing Gannon. They both want to save each other as Irish fights Claire and the boys . Irish is such the alpha in this installment from protecting Claire by confessing to actually protecting her butt , Its a great installment
BOOK THREE: WHERE IN THE WORLD IS GANNON DODD
BOOK BLURB
While Irish McConnell and Claire Montgomery try to hide their sizzling attraction for one another, and in order to keep the peace between his vampire clan and her werewolf pack, Claire begins to dig deeper into the mystery surrounding the very bad thing she's done (it's really bad!) based on a rather obscure clue.

To follow the clue, she makes plans to immerse herself in a place Irish would never allow her to go into alone, but in an effort to keep him out of her troubles with her pack, Claire makes a choice that could end up getting her killed.

But Irish has his hands full, too, because his efforts to protect Claire have gone very awry...

MY REVIEW
Here we ho the newest installment of Irish and Claire. This one is hot ladies. Who wouldn't want a hot sexy vampire to save you when you get driven over the bluff. That's what happens with Claire.as she is running around to the lighthouse . Irish saves her ass yet again. They have wild passionate sex . Again. These two are hot hot hot
Dakota loves to tease us . I so can't wait to find out what going to happen next .keep em coming

Claire Montgomery’s heart is in the right place. It is. Honest! Now if only she’d stop doing things that could make her heart stop beating forever…

He might as well admit it. Irish McConnell can’t stay away from Claire, no matter what all the rules say. And anyway, clan and pack politics have nothing on the fine mess he and Claire have gotten themselves into. From missing corpses to dastardly deals in the dreaded Zone, to a vital piece of information about what happened the night Gannon Dodd was murdered, they’ve jumped from the frying pan into the fiery pits of hell.

But even that can’t compare to the combustible heat generated by this sexy, forbidden paranormal pair.

MY REVIEW
Dakota is killing me with this serial . It seems lie it is just getting better. In this episode, Claire and Irish are in the zone. Where they Re at his friends house and well you know Irish and Claire . Sex is on the agenda and they finally talk about why she killed Gannon and what is going on . This is kind if a emotional chapter . I really love Irish and Claire. She is so string but also needs rescuing from herself most of the time , Irish is just hot and all Alpha . Bring on the next chapter in my new found soap opera .
BOOK FIVE : REVEALATION
BOOK BLURB

Oh, Claire’s really done it now. As if her week hasn’t been bad enough, what with the blood and the drowning and the head bashing and the intense sex… Okay, that last one was pretty awesome. But now she’s gone and got herself caught in the clutches of a paranormal so evil, he makes Satan look like a sissy. This baddest of all baddies is her key to beating a murder rap—if he doesn’t kill her first.

Where’s a bloodsucking knight on shining chrome when you need one?

Tonight, at long last, fangs will flash, fur will fly, heads will roll, and dastardly deeds will be revealed in this heart-pounding, breath-holding, secret-exploding final episode of Fangs of Anarchy—Forbidden Alpha!

MY REVIEW
This is a great ending episode for Irish and Claire so wasn't expecting the ending . Which I though was so great . But before we get to the ending . Let me tell you the rest of the story, We come back to Claire in big ass trouble. She finds out who the demon that was talking to Gannon, She is stuck and hoping that Irish will come get her out of it . Like he has done many times through out the books. Well that is what you do when you are in love. Of course they come and save the day , But who knew that Hadley was going to be so kick ass and help out.
Thank you Dakota for taking us on the fun ride with Claire and Irish . Every woman needs to have these on their naughty tbr list for this summer

MY OVERALL REVIEW
HOLY HOT is what I say about this book. Dakota sure can write some great passion filled pages . She takes us on a ride that has vampires, werewolves , mystery and of course romance. The twists and turns in this serial will keep you turning the pages all night long. I gobbled up each episode every week . The wait was hard , its kind a like you waiting for your favorite t,v show.
The characters will suck you in and keep you interested in each and every episode. The men are alphas and the women are strong, yet can get it into trouble very easily. You will like all the characters . I had some lusty thoughts of Irish a few times . Oh they were great fanasties by the way . Ok enough drooling over Iris and back to my review.
This was the first series that I have read by Dakota , now I want more. I can't wait for the sequel and what will come of Claire and Irish and the rest of them.
So if you want a great serial for the summer check out this set of books. They are perfect for those lazy days lying in a hammock. Or when you are hanging at the pool . I swear these need to be on every woman's naught tbr list. Your hubby will thank you
Posted by BOOKS TO CURL UP WITH at 11:05 AM