suffering big book hang over on this Wednsday

Good Wednsday  all , I am suffering from a very emotional book hangover today. All I can say is she did it again. Today I am review REVIVING HAVEN by Cory Cyr 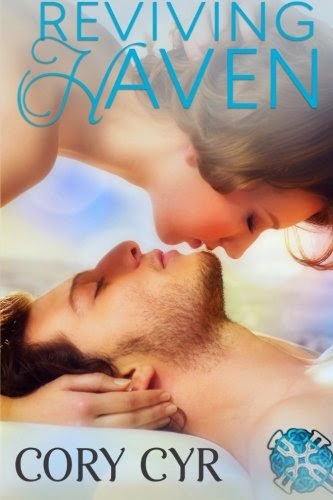 ******STRONG LANGUAGE & EXPLICIT SEXUAL SCENES******18+ The only man Haven Wells ever loved left her broken, feeling emotionally battered and imperfect. Seven years later she's found solace in the bookstore she owns, finding love between the pages of the books she reads. Haven has adapted to a life without love or men, living vicariously through her best friend and roommate. He's Perfect. Just ask him. Latch McKay is gorgeous, rich and successful. A famous graphic designer, he's well known for the video games he creates. However, he's also known for the trail of women he leaves behind. Latch is the walking, talking definition of wanton sex. When Latch sees Haven at a party it's lust at first sight. A night of intoxicated passion leaves him wanting her so much he's almost willing to give up his man-whore crown. Haven has no idea why this gorgeous and much younger man wants her. After two weeks of Latch stalking her...his version of wooing — Haven has tried everything to make him go away. But, Latch doesn't give up, and Haven finally agrees to one date. If Latch can break through Haven's walls, he just might have a chance to keep her. Unfortunately Latch has a secret of his own. As Haven's walls begin to crumble, Latch's dark secret begins to emerge.

MY REVIEW
Well all I can say is that Cory has hit it out of the park again. She is the reason for the bags under my eyes and the intravenous coffee drip I have attached to my veins right now. Yes I know it is my own fault actually. I should not of started this book last night, but I as soon as I saw it say that it was live . Well my one click finger was itching, so I bought. The downloaded on to kindle, read the first page then the second page . Next thing I know hubby was taking away my popcorn bowl and kissing me good night. To which I responded I will be there soon , after one more chapter , well 4 chapters later and realizing I was on chapter 17. I decided to head to bed. Just finished the book.
Let me introduce you to Latch and Haven. Latch is for the lack of a better word a extremely sexy man whore , who is also a very rich man. But he is only 25, when he sees Haven at a party he is instantly drawn to the 37 year old . With her sexy librarian look but is broken beyond repair from a past relationship. The way they meet is right out of a romance novel, as he just promises her a taste. No names change but after she passes out , Latch being the gentleman he is takes her home . Then their relationship starts . The first few times well lack of a better word were awkward. Haven tries to push him away but he doesn't. I now have a new word for a blow job. puff chore anyone. I giggled when I read that . As their relationship grows, their pasts seem to come back and haunt them and Latch's dark secret is coming to light .
Cory takes us on a roller coaster ride of emotions. The intensity of Latch an Haven's characters just hit you in the gut. Latch is larger then life and Haven may seem naïve but she comes out of her shell and really blossoms with Latch. Cory can take a character from one extreme to the other and does it in such a way it will rip your guts out. There is one scene at the gala that you will want to kill Latch .   Cory builds her characters up and lets them fall to the depths of hell only to be redeemed and you fall in love with the new and improved character. I love her female characters as they are older and seem to be broken at first then you see them grow and become the woman that they should be . You feel like she is writing just for you.. We all can pick out something from each of her characters . If it is the best friend that is there to pick you up, eat junk food with you and then turn around and kick the bastards ass that hurt you . To the guy friend that would beat the crap out of you to teach you not to treat women the way you did.
Trust me ladies . you will fall in love and then get your heart ripped out, Then fall in love again.. This is one of those books that will leave wanting more. I laughed, I wanted to slap a few characters upside the head and I cried and I mean I had an ugly cry in a couple of areas. The book is flawlessly written  and Cory writes with such love you can't help but to fall in love. There is a lot of sex in this book and I do mean a lot of sex. but there is also a romance and a love story. You will be wrapped up in a whirlwind of emotion .love and sex. You will want to find a very quiet place, grab your favorite drink, snack and comfy blanket . Because once you start reading you will not stop until you are done. Your kindle might have a melt down as you read but it is so worth it. This book should be on the top of  your TBR LIST. I can't wait till Cory's next book . She is becoming one of my favorite authors . Check her out.
Posted by BOOKS TO CURL UP WITH at 8:40 AM