Good Monday morning all I hope you all had a great weekend. I know I did I sat in the sun and read all weekend long.. Today we are going to review QUEEN OF BONES by Greg Zimmerman . 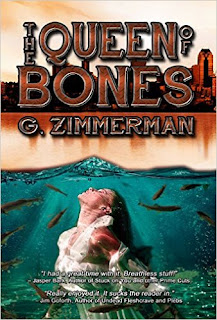 A seventeen year old orphan, alone in the deadly post-apocalyptic world. She’s feisty, yet vulnerable; a woman, and yet a young girl. And with her discovery, she just might be humanity’s savior. Meet Sara Hill . . .

Two years after the advent of the deadly solar storms known as sunthrobs, civilization is in a shambles. Most animal species are extinct. The few people who survived have formed roving bands of sun-scorched degenerates who scour the land for scarce
provisions. The periodic sun throbs continue to take their deadly toll. Survival is a day to day struggle.

Sara Hill and two other teenagers are driven from their fallout shelter home. They head west, hoping to find asylum in a rumored Seattle colony that is
striving to re-establish civilization. If caught by the
marauding bands, they will be robbed, the two girls raped, and all of them most likely killed. Sara brings her discovery of how to survive the sun
throbs with her. But will she herself survive the horrors of the road? Does the fabled Seattle colony even exist? Either way, there is no turning back.

MY REVIEW
What do you do when you are among the last living people on the planet . You survive any way you can. Meet Sara Hill living in the wasteland called earth . After a solar storm basically wipes every human being off the face of the earth. Sara and her two friends start out to find the colony in Seattle if the colony even exists . The thing that is saving them is Sara's rheumatoid arthritis and there breathing poles . Sara has lost so much and is trying to get everything back that she once had . Along the way she meets enemies and enemies that turn out to be her friends and greatest allies. Will she survive the sun throbs and the people, to help all of man kind

This is such a different twist on the end of the world and the apocalypse. And actually kind of creepy in a way also because you actually hear of solar flares and that in the news . So when you are reading along you start to think that wow maybe it could really happen. Or maybe its just me and my paranoid mind. The author writes of a vast wasteland that is scorched and dead , nothing can survive the extreme heat and staying alive is a daily struggle,
The main character in the book Sara is one strong seventeen year old girl. Who sometime you just want to slap because of the way she acts , until you remember she is only seventeen and that's how seventeen year olds act . There are moments that you feel sorry for her and what she has to go through because of her arthritis . It just makes things so much worse for her .  She is a survivor and you see her grow up along her journeys . She takes a lot of crap but also dishes it out too . She is willing to do anything to stay alive even using her sexuality to help her survive. She is the type of character that one moment you want to hug her and the next you want to slap her . Which is the type of character I kind of like . The cast of characters that she meets along the way are very diverse . From the degenerates to the men from the seattle colony.  The all teach Sara a way to survive and she teaches them a thing or two also.
I truly enjoyed this book , the author took us on a fast paced roller coaster ride full of twists and turns. This take on the apocalypse is new and exciting to me . Its honestly nature made and actually has a way of happening . There aren't any zombies running around there is a bigger danger then zombies in the book . It is man and what he will do to survive anything.
Over all I really enjoyed the book but I did find the first part to be a bit boring but once you get past the first 4 chapters the book really picks up and takes you on a fast paced ride that will keep you on the edge of your seat . You will be cheering for Sara and also wanting to strangle her at the same time . You will love some characters and wish for death to others . This story will take you to edge of your seat and bring you back from the edge time after time . This is the book you want to read if you want to read about the end of the earth and the apocalypse that doesn't have zombies or was started by and out break . This is the book for you and I so can't wait to see what happens to Sara and the gang in book 2. So if you want a great book check it out QUEEN OF BONES by Greg Zimmermann
Posted by BOOKS TO CURL UP WITH at 9:12 AM