Good Monday morning all, today we are going to review a fantasy author that I really like and his fourth book in his dark blade series . DARKBLADE SEEKER  by Andy Peloquin 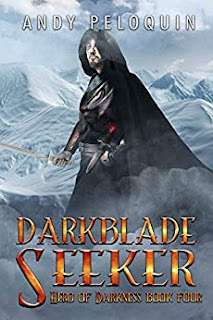 The price of truth is blood and death

The Sage and The Warmaster. Names whispered by dying lips, the true power controlling the demons hiding among mankind.
And now, the Hunter has climbed the highest mountain peak to put an end to their reign. Facing a secret sect of professional torturers and the descendants of a long-dead race, his skills as an assassin will be put to the ultimate test.
But the twin temples of Kara-ket harbor more than just his enemies. Built by a long-dead race, they house secrets that could not only give him the answers he seeks, but unleash a whirlwind of chaos and bloodshed across their world.
He must make a choice: will he obtain the answers he seeks at any cost, or sacrifice himself for the sake of those who rejected him?
The ruthlessness of Durzo Blint, the cunning of Dexter, the unstoppable drive of the Punisher--buy it now to continue the Hunter's epic journey!

Praise for Hero of Darkness:

It starts off with a bang and the pace never slows down. – K.V.
Pay attention and you just might discover that the story you thought you were reading is not the story you finish. – Amazon Review
What can you say about a book that grabs you from the very first page? You become a bit obsessed and read the whole book in like three days! – P.S.
In the Hero of Darkness Series:
Book 1: Darkblade Assassin (May 29th)
Book 2: Darkblade Outcast (June 5th)
Book 3: Darkblade Protector (June 19th)
Book 4: Darkblade Seeker (July 10th)
Book 5: Darkblade Slayer (August 7th)
Book 6: Darkblade Savior (September 4th)

This is the fourth book in the Darkblade series and it starts of with a bang .  The Hunter will do anything in his power to keep Haileen safe . He is literally hanging by his finger tips on the edge of a cliff on his way to find the Sage the worst demon yet . When he finds the Kara-ket and hopefully the cure for Haileen . Will Haileen and Hunter survive to get everything they need .

This book has taken the hunter to a new level . He has grown into more then an assassin . He has evolved into a protector of Haileen . He wants to get answers to help the young boy in his care . Don't get me wrong it is great to see the other side of the Hunter . But he does still have the assassin in him . When he comes across the Sage and the  War master . Two beings that are evil in different ways one is a sociopath and the other is a psychopath.   I think that my favourite character in this book is Haileen . He is such a sweet young boy who needs protecting but he also can calm the Hunter down . There are moments you want to wrap Haileen up and hug him tight and the next moment you are cheering him on.

This book has it all , the twists and turns will have you reading well into the night . The character are well written and complex. The story moves at a fast pace  and you will be hooked by the third page .  You will love the interaction between characters and there will be times that you will take the Sage's side cause you just don't know if he is a good guy or horrible . The twists and turns are great you will be on the edge of your seat through out most of this book . You will want to hug Haileen a few times and cheer the Hunter on through out the book . This series just keeps getting better and better with each story we see the Hunter evolving into more then an assassin . I suggest that you start at the beginning and read the series in order so you know what is happening and you see the Hunter grow and evolve . This series would be great for reading around the camp fire or the pool on those lazy days of summer
Posted by BOOKS TO CURL UP WITH at 9:08 AM