Good Monday all , today we are going to review a new author to me , Jennifer Hillier and her book JAR OF HEARTS . 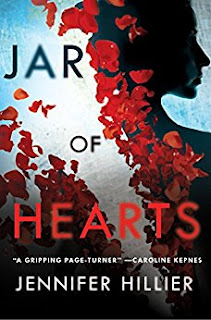 "Jar of Hearts grabs you by the throat! The perfect blend of riveting characters, chilling details, and gasping twists in this standout thriller will keep you frantically reading until the explosive end.” – Lisa Gardner, New York Times bestselling author of Right Behind You • A Top 10 bestseller (CrimeReads) • A June 2018 LibraryReads pick •
This is the story of three best friends: one who was murdered, one who went to prison, and one who's been searching for the truth all these years . . .
When she was sixteen years old, Angela Wong—one of the most popular girls in school—disappeared without a trace. Nobody ever suspected that her best friend, Georgina Shaw, now an executive and rising star at her Seattle pharmaceutical company, was involved in any way. Certainly not Kaiser Brody, who was close with both girls back in high school.
But fourteen years later, Angela Wong's remains are discovered in the woods near Geo's childhood home. And Kaiser—now a detective with Seattle PD—finally learns the truth: Angela was a victim of Calvin James. The same Calvin James who murdered at least three other women.
To the authorities, Calvin is a serial killer. But to Geo, he's something else entirely. Back in high school, Calvin was Geo's first love. Turbulent and often volatile, their relationship bordered on obsession from the moment they met right up until the night Angela was killed.
For fourteen years, Geo knew what happened to Angela and told no one. For fourteen years, she carried the secret of Angela's death until Geo was arrested and sent to prison.
While everyone thinks they finally know the truth, there are dark secrets buried deep. And what happened that fateful night is more complex and more chilling than anyone really knows. Now the obsessive past catches up with the deadly present when new bodies begin to turn up, killed in the exact same manner as Angela Wong.
How far will someone go to bury her secrets and hide her grief? How long can you get away with a lie? How long can you live with it? Find out in Jennifer Hillier's Jar of Hearts.

MY REVIEW
This is the first book I have read by this author and I must say that I was really impressed . You know when you have a secret  and you are trying to keep this dark secret its bound to come out in one ay or another . Fourteen years ago Geo was part of a secret about what happened to her best friend Angela. After fourteen years and time in prison . Geo is finally released from prison and going to try and start her life over . But there is more to that night then people know . Will Geo be able to shake the fact that people are turning up dead around her that are killed in the same way Angela was. Will Geo be able to break from her past and have a life outside the lie .
This book is full of well written complex characters . Georgina aka Geo is a strong but confused woman , She has been carrying a dark secret around since she was a teen and ends up in prison at the beginning of the book . The five years she is in prison have strengthen her and made her into the woman that when she comes out all she wants is to be left alone . She is strong and gutsy but also it feels like she is still living in the past . The cast of secondary characters are varied and all have a part to play in the telling of Geo's story
This book has so many twists and turns the author can really tell a story. She takes us on a emotional rollercoaster ride that will have you sucked in from the very first page.  I truly enjoyed the writing style of this author. There is such and emotional book, I cried and I got angry  and I was generally perplexed and on the edge of my seat most of the way through this book .  There was only one thing that left me for not giving this a five star , The ending seemed rushed like the author had taken the characters to the edge and didn't know how to pull them back and build up the ending . Over all I truly enjoyed this book and the twist at the end had me reeling . I honestly couldn't believe what the author did . This is a creepy intense story that will have you on the edge of your seat the whole way through the book . This is a great summer read and you should pick it up and read it by the pool .
Posted by BOOKS TO CURL UP WITH at 2:29 PM