Welcome to Tuesday everyone . I hope you are all having a great week . Today we are going to review BRING ME BACK by B.A Paris 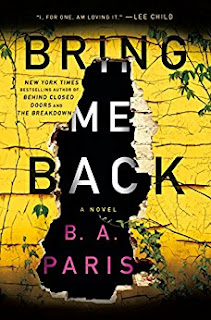 THE NEW TWISTY, GRIPPING READ FROM B. A. PARIS, THE AUTHOR OF THE INSTANT NEW YORK TIMES AND USA TODAY BESTSELLING NOVELS BEHIND CLOSED DOORS AND THE BREAKDOWN
“We’re in a new Golden Age of suspense writing now, because of amazing books like Bring Me Back, and I for one am loving it.” —Lee Child
"[An] outstanding Hitchcockian thriller.” —Publishers Weekly (starred review)
She went missing. He moved on. A whole world of secrets remained—until now.Finn and Layla are young, in love, and on vacation. They’re driving along the highway when Finn decides to stop at a service station to use the restroom. He hops out of the car, locks the doors behind him, and goes inside. When he returns Layla is gone—never to be seen again. That is the story Finn told to the police. But it is not the whole story.
Ten years later Finn is engaged to Layla’s sister, Ellen. Their shared grief over what happened to Layla drew them close and now they intend to remain together. Still, there’s something about Ellen that Finn has never fully understood. His heart wants to believe that she is the one for him...even though a sixth sense tells him not to trust her.
Then, not long before he and Ellen are to be married, Finn gets a phone call. Someone from his past has seen Layla—hiding in plain sight. There are other odd occurrences: Long-lost items from Layla’s past that keep turning up around Finn and Ellen’s house. Emails from strangers who seem to know too much. Secret messages, clues, warnings. If Layla is alive—and on Finn’s trail—what does she want? And how much does she know?
A tour de force of psychological suspense, Bring Me Back will have you questioning everything and everyone until its stunning climax.

What do you do if you head to the restroom in a gas station and when you come out the love of your life is gone . That is what happened to Finn . Layla and Finn are young and in love they can't get enough of each other . Until the day she goes missing and Finn is the only one that has seen her. But there is more to this story . After ten years later when Finn is engaged to Layla's sister Eileen . When a phone call puts Finn on the mission to find Layla after mysterious phone calls and emails start happening to the house . Will he figure out what is going on and who is sending them . Or will he be questioning his own mind .
The characters in this book were ok  sometimes they came off as very immature. Finn kind of drove me crazy , he was a middle aged man but sometime he came off as very immature . Then there were times that he was overzealous . Layla's character was well we really didn't get to know about her , she was an intrigant part of the story even though we see her more in flashbacks and memories . Eileen is I think the best character in the book there is so much more to her then meets the eye . And you will see when you read the book  what I mean .
This book started out really slow , it took a bit to get into the story line but once you do its a non stop roller coaster ride . The author really puts her characters through the ringer .There some parts of the book that I felt dragged and were slow and I wish the author had built more of an ending  The ending fell flat and I was kind of confused on what was happening . Over all I did enjoy the story and the characters.  There was a great twist that will have you going what. So if you want a good read that will have you on the edge of your seat check it out
Posted by BOOKS TO CURL UP WITH at 11:47 AM