Good Tuesday all , today we are going to review THE PALM READER by Christopher Bowron 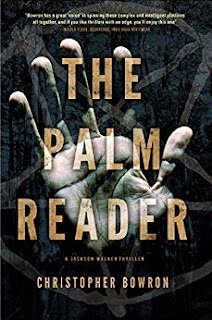 Jackson Walker once again faces his demons in this haunting sequel to Devil in the Grass. Now working as an investigative lawyer for Peter Robertson, Jack teams with Janie Callaghan to solve the disappearance of a sleazy client specializing in taboo pornography. Meanwhile the evil head of the Church of Satan weaves an intricate web to lure Walker as the sacrificial lamb in an Everglades Black Mass ritual.

MY REVIEW
This book is the sequel to the authors first book , Devil in the Grass , but it can be read as a stand alone . This book is a great read, Jackson is now working for a lawyer as an investigator . He gets a case which kind of turns his stomach , when he has to find the client after he disappears . As they enter the world of taboo pornography they don't realize there is an evil man from Jackson's past. Ther head of a church of Satan setting up Jackson to become the sacrificial lamb in a black mass ritual
The story well written and the characters are so well written . Jackson Walker is a character that is very complex . He has gone through so much and has come through it . Now he is well adjusted and but there are things that he has in his past and his childhood .  He is a good guy and there is more to him then meets the eye .  There is a magic to him . Nathanial Walker , gramps . is a shaman and is a very pivotal part in the book . He is a tough old man who is more then just a man .   They are strong men in their own rights .  Jacks nemesis Mason Matye is pure evil .  You can't like this man even if you tried .  Now Lolita is the best character in the book , she is hilarious but also kind of spooky at the same time . The way she acts its the best some of the one liners will make you giggle .
This is a fast read, I read it in an afternoon out at the lake . The author takes us on a roller coaster  ride .  The book is edgy and just a little on the creepy side. There are moments in this book that you honestly think of the possibility of it actually happening in the world . The plot isn't far fetched, it can happen in todays society . So if you want a book that has mystery . intrigue. murder and mysticism . This is the book for you , just sit back and enjoy you will not be disappointed .